Update Required To play the media you will need to either update your browser to a recent version or update your Flash plugin.
By Christopher Cruise
30 November, 2014


Malaria control efforts depend mainly on things like chemically-treated mosquito nets and sprays designed to kill the disease-carrying insects. But scientists in Kenya say another method -- a vaccine -- will be available next year. Researchers are already testing the vaccine on volunteers. If tests are successful, the treatment could add an important new weapon in efforts to control and possibly stop the disease.

Malaria kills more than 500,000 people a year worldwide. The disease sickens millions more every year. Many of those who die or become sick are children living in African countries south of the Sahara Desert.

Kisumu is the third-largest city in Kenya. One-third of all patients in and near the city suffer from malaria.

Existing malaria control efforts have helped to reduce the number of infections over the past ten years. But there has never been a vaccine to protect people against the disease. 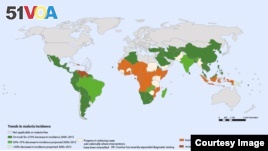 Scientists in Kisumu have created a vaccine that they are now testing on people. They worked with the British drug company GlaxoSmithKline and others to develop the vaccine. Scientists say vaccinating people -- especially young children -- is necessary if the disease is to be stopped.

Dr. Martina Oneko is a pediatrician -- a doctor who cares for babies and children. She helped to carry out a study on the effectiveness of a malaria vaccine, in rural western Kenya.

"We saw a very good success of the vaccine resulting in health improvements in these children. They were just not as sick as their counterparts in the community who were not vaccinated. The overall vaccine efficacy in the older age group for all the sites was 47 percent and in the younger age group it was 27 percent."

Malaria researchers say the vaccine may not stop the spread of malaria by itself. But if it is used in combination with existing interventions, the lives of millions of people in sub-Saharan Africa will be saved.

spray – v. to put (something) on a surface or into the air using a special container that produces a stream of small drops of liquid or gas

vaccine – n. a substance containing killed or weakened organisms given to a person or animal to produce protection against a disease

infect – v. to make sick with something that causes disease

efficacy – n. the power to produce a desired result or effect

parasite – n. an animal or organism that lives in or on another animal or plant and gets food or protection from it

introduction – n. the act of bringing something into practice or use for the first time