Update Required To play the media you will need to either update your browser to a recent version or update your Flash plugin.
By Susan Shand
21 April 2020


Safari operator Pankaj Shah would usually be showing tourists around the beautiful areas in his native Kenya. Instead, he is leading a volunteer effort to feed thousands of families.

Many Kenyans found themselves with little money when the new coronavirus attacked the country's economy.

"One old woman told us she hadn't eaten for days," Shah said as he walked along a line of men putting food into containers. 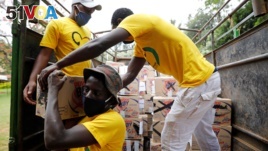 Workers of the Team Pankaj aid group load a truck with food donations to be distributed for people in need in Nairobi, Kenya, April 14, 2020. (REUTERS/Baz Ratner)

Kenya reported its first case of the coronavirus on March 12. The following week, schools closed. So did many businesses. Some families left the capital, Nairobi. The work that paid most people in populated areas came to a halt.

As the area went into "total lockdown," the forgotten families in poor neighborhoods began to starve.

"People were getting hungry and angry," Shah said. He knew someone had to act.

Shah asked a few friends to help. A school closed by the virus offered its building as a headquarters.

Kenya's Asian community answered the call. They brought money or truckloads of fresh food that could no longer be exported.

Shah's volunteers call themselves Team Pankaj. They have sent out 24,000 hampers of food since March 22. Each container has enough food to feed a family of five people for two weeks.

He is asking wealthy Kenyans to donate about $40 each to support the program.

"I just need half the rich people here to care enough" to pay for a container, he says.

His telephone rings with community leaders, clergymen and others asking for help. Shah tests each possible partner with a small number of boxes to see how well they distribute the food. If the small distribution is successful, he gives them more.

Recently, he sent two truckloads of food to the Deep Sea slum, where many poor people live. People waited in line and put their fingers in ink before walking away with the containers of vegetables. Volunteers helped pregnant women and those with babies.

Mary Wangui said she had been desperate. Her children were hungry.

Pankaj Shah has never operated any kind of aid program before the coronavirus arrived in his country. He says he is guided by a memory. He met Mother Teresa over 30 years ago in Nairobi when the two were involved in a traffic accident.

The incident brought an unlikely friendship between a "young, wild" businessman and the Catholic religious worker, he said. The world-famous missionary cared for the poor. Shah said he volunteered with Mother Teresa for three months.

"I think about what she would do," he says.

safari – n. a trip in Africa to see wild animals

tourist – n. one who visits a place for pleasure

distribute – v. to give out to people

missionary – n. one who travels to spread religion