Kerry Presses on with Ceasefire, Death Toll Rises in Gaza

Update Required To play the media you will need to either update your browser to a recent version or update your Flash plugin.
By Hai Do
25 July, 2014 U.S. Secretary of State John Kerry said efforts are not ending to find a cease-fire between Israel and Hamas militants in Gaza.

America's top diplomat said "This is a broad effort. At this moment we are working toward a brief, seven-day cease-fire in honor of Eid." The holiday of Eid marks the end of the Muslim observance of Ramadan. He stood next to Egyptian Foreign Minister Sameh Shukri as he spoke in Cairo.

Mr. Kerry said details of a framework, or guidelines, toward a stop in the fighting are still under discussion. He said Israeli Prime Minister Benjamin Netanyahu told him he wants to find a way to make progress although Israeli media said Mr. Netanyahu's cabinet had rejected the framework.

Mr. Kerry said a break in fighting will give everyone involved the chance to examine issues that have caused weeks of deadly violence between Israelis and Palestinians.

Mr. Kerry, Mr. Shukri and U.N. Secretary-General Ban Ki-moon have been trying to get both Israelis and Palestinians to stop the violence.

Number of Palestinian Dead Rises Above 800

More than 800 Palestinians have now died in Israel's offensive against Hamas militants. A Palestinian woman holds an infant injured at a U.N-run school.
Reports say Thursday was the deadliest day of the 18-day-long military campaign. Among the victims were at least 15 Palestinians in a school operated as a shelter by the United Nations.

Israel said one of its soldiers was killed in Gaza on Friday. That brought the number of soldiers killed to at least 32. So far, rocket and mortar attacks by Palestinians have killed at least two Israeli civilians.

On Friday, rockets launched by Hamas set off warning signals around Tel Aviv. Several rockets were shot down. But one hit a building in Ashkelon. No one was hurt.

Violence Spreads to the West Bank

In the West Bank, many Palestinians marched in the northern village of Hawara in support of Gaza. Thousands also demonstrated over the night. Many observers are calling that demonstration the biggest protest in the West Bank in about 10 years. 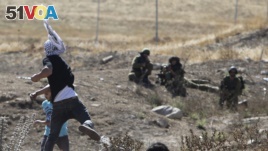 Palestinian protesters throw stones at Israeli soldiers in the West Bank town of Hawara near Nablus July 25, 2014.
Protesters in East Jerusalem threw rocks and Molotov cocktails at an Israeli security point. Palestinian health workers said one person was shot dead and 200 others were wounded when Israeli troops returned fire.

The unrest continued into Friday with reports of four more deaths near Nablus and Hebron. At the Al-Aqsa mosque in the Old City of Jerusalem, Israeli security forces barred men under the age of 50 from entering the area. The action led to more clashes between the opponents.

Police Minister Yitzhak Aharonovitch told the Israeli Army radio "We have had a very difficult night."

Earlier this week, Hamas leader Khaled Meshaal said he supported a stop in fighting and set his own conditions. Hamas demands that Israel eases restrictions on the 1.8 million Palestinians in Gaza. The group also calls for the release of hundreds of prisoners seized in the West Bank last month. And it wants Egypt to open its border with Gaza.

Both Israel and Egypt consider Hamas a security threat.

And that's In the News, from VOA Learning English. I'm Christopher Cruise.

For the latest news, visit www.51voa.com.

This story was written in Special English by Hai Do from VOA News reports. It was edited by Jeri Watson.