Update Required To play the media you will need to either update your browser to a recent version or update your Flash plugin.
By VOA
03 August, 2015

U.S. Secretary of State John Kerry is hearing concerns about the agreement reached with Iran last month to limit its nuclear activities. Mr. Kerry is in Doha, Qatar at a meeting of the Gulf Cooperation Council.

Some members of the six-nation group are worried that the agreement would strengthen Iran. They fear a strong Iran would cause instability in the area. And they are concerned that Iran might increase its support for groups linked to terrorism after economic restrictions are cancelled.

After his meetings in Qatar, Mr. Kerry will travel to Singapore, Malaysia and Vietnam. In Vietnam, he will mark the 20th anniversary of the establishment of the country's diplomatic relations with the United States. 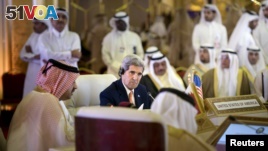 The value of stocks on the Athens Stock Exchange dropped sharply Monday after the exchange opened for the first time in five weeks. The exchange index lost almost one fourth of its value soon after trading began, but share prices improved a little after a few hours.

Officials in Myanmar say 46 people have died in several days of flooding and landslides. The Ministry of Relief and Resettlement said Monday that the disaster had affected about 200,000 people in northern and western Myanmar. The government, military and aid groups are working to help them.

Opposition leader Aung San Suu Kyi visited one of the areas hit by flooding on Monday.

President Thein Sein traveled to an area in northern Myanmar on Saturday. It is one of four areas where the president has declared a state of emergency.

Weeks of heavy rains and a cyclone last week caused the flooding and landslides. The western part of the country has been hit the hardest.

President Barack Obama is to release new rules on Monday designed to reduce carbon pollution from power centers. The plan would reduce the amount of electricity coming from power centers that use coal. Administration officials want more power to come from natural gas, wind and the sun.

The plan calls for the centers to reduce the amount of carbon they release by 32 percent below 2005 levels by the year 2030.

The president says carbon released into the air is threatening the nation's economy, its security and people's health.

Power companies and Republicans in Congress are expected to oppose the plan because of what they say will be the high cost of reducing pollution. They are also worried that the cost of electricity will rise sharply if the plan goes into effect. As many as one-half of the 50 states are expected to ask courts to stop the plan.

The Malaysian transport minister says a part of a plane found on an island in the Indian Ocean last week is from the same kind of aircraft as the Malaysia Airlines plane that disappeared last year.

The minister said officials are asking people living in areas near the island to help look for any other parts of the missing plane.

At least one other part of an airplane was found about 25 kilometers from where the first part was discovered. It could be from an airplane door.

instability – n. the state of being unstable; likely to change quickly