Update Required To play the media you will need to either update your browser to a recent version or update your Flash plugin.
By Susan Shand
16 December, 2018


The great-grandson of the leader of Iran's 1979 revolution, Ayatollah Ruhollah Khomeini, has been forced to defend his way of life.

Ahmad Khomeini was reacting to the publication of his picture online. The image shows him standing next to a young woman at a horseback riding center. He is wearing high-end sunglasses and a Nike shirt.

Iranian social-media users are condemning the 21-year-old clergyman's "luxury horse-riding" as an activity most Iranians could never experience. They say it is far too costly. 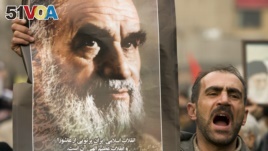 FILE - A man holds a picture of Ayatollah Ruhollah Khomeini, founder of the Islamic Republic as government supporters protest against opposition demonstrations during the holy day of Ashura, in Tehran, Dec. 30 2009.

Iranians are dealing with a collapse in the value of their money after the enactment of new United States sanctions on Iran. The U.S. actions are meant to punish the Iranian government for its military and nuclear efforts.

The head of the Khorasan news service, Mohammad Said Ahadian, said the picture damaged "the reputation of the Imam," meaning Ruhollah Khomeini. He added that the former leader lived a simple life to demonstrate his sympathy for the poor.

Ahadian called on the young man's father, Hassan Khomeini, to condemn his son's activities. Hassan Khomeini is close to critics of the Iranian leadership. Ahadian added that Khomeini's legacy should be controlled by someone else.

Ayatollah Khomeini died of heart failure in 1989. He is celebrated in Iran as the founder of the Islamic republic. His supporters call him "the Imam."

The head of the political desk of Moj news agency described Ahmad Khomeini as a "luxury agazadeh". Iranians use the term "agazadeh" to describe children of powerful or wealthy people who are believed to use their family connections for personal gain.

"Your behavior is not Khomeini-like. You have nothing in common with [Ayatollah] Khomeini, you only carry his name," Amir Tohid Fazel wrote of Ahmad Khomeini on Twitter. He added, "the Imam that we knew would not be horseback riding (during) people's problems."

'They attack my father through me'

Ahmad Khomeini reacted to the criticism by saying his financial situation was not "special." He said the year-old picture had been put online from someone's private collection without permission.

He suggested that the people who put the picture online were targeting his father. In 2016, conservatives prevented Hassan Khomeini from competing for a seat on the Assembly of Experts, a group that chooses the country's leader. The leader, now Ali Khamenei, holds the most political and religious power in Iran.

"My father's enemies [attack me] in order to damage him. Therefore, this is not the first time, nor the last," he wrote. He added that someone in the media wants his father to give up control of the Imam's legacy.

He added that he does not own a horse and is not active in "such sports."

Some believe Ahmad Khomeini and his father have been treated with suspicion by Iran's conservatives because of their sympathy for reformers.

The cost of living has sharply increased in Iran. Stores have shortages of some goods, such as medicine, according to Iranian media. Many expect the situation to get worse as U.S. sanctions take hold.

Late in 2017 and early this year, thousands of Iranians protested rising prices and corruption by taking to the streets in around 80 cities. The government pushed back by arresting many people, increasing security and the blocking of mobile telephone service. Since then, there have only been a few protests, mostly by teachers and factory workers asking for higher wages.

Other Iranians have expressed their anger on social media where they can criticize the rich and powerful and their children.

Last year, online photos showed the luxurious wedding of Iranian model Anashid Hosseini and Amir Mohsen Moradian, the son of Iran's ambassador to Denmark. The Fararu website suggested the wedding party was held when 12 million Iranians who want to get married cannot afford it. Hosseini and Moradian said the event was not "costly" and that they paid for it themselves.

RadioFreeEurope/Radio Liberty (RFE/RL) reported this story. Susan Shand adapted the report for VOA Learning English. George Grow was the editor. RFE/RL and VOA each are part of the U.S. Agency for Global Media.

luxury – n. a condition of living at great ease

online – adj. connected to a computer or telecommunications system

reputation – n. : the way in which people think of someone or something