Update Required To play the media you will need to either update your browser to a recent version or update your Flash plugin.
By George Grow
26 September, 2014

The Indonesian human rights activist Munir Said Thalib was killed 10 years ago this month. Today, his death remains unsolved, but not forgotten. Indonesia is now preparing to swear-in a new president. The governor of Jakarta, Joko Widodo, was elected to the position earlier this year.

Munir Said Thalib died at a time when civil rights and freedom of speech were suppressed in Indonesia. The activist helped to uncover evidence of the military's involvement in human rights abuses in East Timor and Aceh. He accused high-level members of the state intelligence agency of involvement in two deadly military operations. One involved the kidnapping and disappearance of student activists during the riots that led to the resignation of former President Suharto. 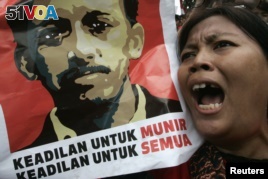 In this undated file photo, a protester holds a poster of Munir Said Thalib during a demonstration outside the National Intelligence Agency (BIN) office in Jakarta.

But speaking truth to power proved harmful. Munir was given arsenic, a poison, while traveling to Amsterdam on September 7, 2004. He died before his Garuda Indonesia flight landed in The Netherlands. It was unclear if he was poisoned on the flight or during a stop in Singapore. Many believe those responsible for his death have never faced justice.

Munir led the Indonesian Human Rights Monitor IMPARSIAL before his death. Ardi Mantro Aridputra works for the group. He says the case is a test for Indonesia.

He says the president-elect must take a firm position to create good and useful change in the future.

Three individuals from Garuda Indonesia were found guilty of charges linked to the murder. But many people believe the three did not act alone.

Some activists claim that those accused were acting on orders from the National Intelligence Agency. They point to evidence of telephone calls and visits between one of the jailed suspects and the deputy chief of intelligence at the time.

But during legal hearings, activists say, evidence was suppressed, and some witnesses withdrew their statements.

Activists point to a United States diplomatic cable from 2007. The Wikileaks website published the cable. It said witnesses claimed the former chief of the state intelligence agency "chaired...meetings at which Munir's assassination was planned."

This month, U.S. Secretary of State John Kerry made a statement about Munir's killing. In his words, "full accountability for all those allegedly involved remains elusive."

But some Indonesians say the new president is unlikely to reopen the case. Aleksius Jemadu heads the school of political science at Pelita Harapan University.

"The culture of impunity is so strong, its massive, and I don't think that he (Jokowi) has the ability, he has the experience in order to, to, to face such a huge challenge because for me it is like (there is) a changing, tacit agreement among the elites not to investigate all these past human rights violations (as) seriously as we might expect or (the) United States might expect."

During his first term as president, Susilo Bambang Yudhoyono set up an independent team to investigate the case. Activists are urging the president-elect to make the results of the investigation known after he takes office.

Haris Azhar is with the Commission for Missing Persons and Victims of Violence, a non-governmental organization. He says Indonesia needs a brave leader.

Joko Widodo is expected to work mainly on two issues when he becomes president. They are government assistance on fuel purchases and negotiating with a parliament in which his coalition holds the minority.

And that's In The News, from VOA Learning English.

This story was reported by Kate Lamb in Jakarta. George Grow wrote it for Learning English. Jeri Watson edited it.

activist – n. someone who takes a strong position in support of or opposition to one side of a divisive issue

evidence – n. materials or facts that prove something

poison – n. a substance that can destroy life or damage health

witnesses – n. people who saw and can tell about an action or event, sometimes in a court of law