Update Required To play the media you will need to either update your browser to a recent version or update your Flash plugin.
By VOA
21 August, 2015


North Korean leader Kim Jong Un placed his military on high alert and declared a "quasi-state of war" in areas near the country's border with South Korea Friday. The action took place after North and South Korea exchanged artillery fire near the border.

North Korea has made similar declarations in 2010 and 2013. The two Koreas are technically at war. The truce that ended the Korean War in the 1950s did not become a peace treaty. 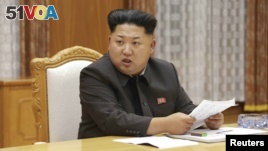 Tensions increased Thursday when North Korea fired artillery at South Korean military positions along the western border. The South responded by launching artillery rounds at the North. The artillery shells appeared to have fallen into the demilitarized zone, or DMZ, separating the two Koreas. Neither side reported damage or injuries.

North Korea's ambassador to China Ji Jae Ryong spoke to reporters late Friday in Beijing. He said "If the enemy ignores our warning it is inevitable that there will be action. Our army does not use empty words."

The North warned Thursday that it would take further military action if South Korea did not stop the broadcasts within 48 hours. South Korean officials have said the broadcasts would continue. And it has raised its military readiness alert to its highest level to indicate immediate danger, imminent attack or invasion.

Korea expert Daniel Pinkston is with the International Crisis Group in Seoul. He says neither side feels it can back down but neither side wants war either.

"I think that both sides want to avoid a high intensity conflict but nevertheless there's a possibility of miscalculation and inadvertent escalation."

The United States Thursday said it was watching the situation closely. State Department spokesman John Kirby said that "provocative actions" by the North only heighten tensions. He urged North Korea to refrain from actions and rhetoric that threaten peace and security in the area.

The latest tension also comes during annual joint military exercises that began Monday. North Korea condemns them as preparation for war. The exercises include South Korea, the U.S. and other allies including Britain, Canada and Australia.

Daniel Pinkston says having the multinational military presence on the Korean Peninsula might keep North Korea from acting but may also restrain South Korea.

Brian Padden and William Gallo reported this story. Mario Ritter adapted it for Learning English. Hai Do was the editor.

quasi –adj. in some way or sense, but not in a true, direct or complete way

miscalculation –n. to make an error in judging something

inadvertent –adj. not meant or planned

escalation –n. to become worse or more severe; to become or make something higher

indicate –v. to show something; to direct attention to