Update Required To play the media you will need to either update your browser to a recent version or update your Flash plugin.
By Hai Do
09 March, 2018

In the last year, the two leaders have exchanged strong insults and threats raising fears of armed conflict on the Korean Peninsula.

The U.S. president has and continues to promise "maximum pressure" against repeated North Korean nuclear and missile tests.

On Thursday night however, Trump accepted Kim's invitation for a meeting by May to discuss "denuclearization." 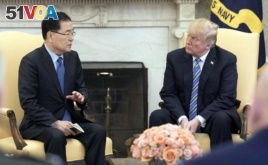 Trump expressed hope on Twitter, saying "Kim Jong Un talked about denuclearization with the South Korean Representatives, not just a freeze. Also, no missile testing by North Korea during this period of time. Great progress being made but sanctions will remain until an agreement is reached. Meeting being planned!"

Reactions from Korea and Japan

South Korean President Moon Jae-in called the development a "historical milestone" that will put the denuclearization of the Korean Peninsula "really on track."

But many observers advise caution. North Korea has long sought a one-on-one meeting with U.S. leaders. And Trump has agreed to meet without pre-conditions.

Robert Kelly is a professor at South Korea's Pusan National University. He told Reuters the meeting is a reward to North Korea.

Kelly added, "It extends the prestige of meeting the head of state of the world's strongest power and leading democracy. That is why we should not do it unless we get a meaningful concession from North Korea. That is why other presidents have not done it."

Daniel Russel is a former U.S. assistant secretary of State for East Asia and the Pacific.

He said, "The North has made peace overtures in the past that did not hold up under scrutiny. Also remember that [North Korea] has for many years proposed that the President of the United States personally engage with North Korea's leaders as an equal — one nuclear power to another. What is new isn't the proposal, it's the response."

From Japan, the English-language Japan Times called it "an opening – nothing more – with North Korea."

In an editorial, it says, "caution must be the watchword of any discussions, however. Talks are welcome, but their goal must be the rollback and eventual elimination of North Korea's nuclear weapons program. Negotiations can never legitimate Pyongyang's nuclear ambitions or accept its status as a nuclear-weapon possessing state."

Lee Jin-gon is a professor of political science at Kyung Hee University. He told the Korea Times, "My view is that Kim offered the peace gesture to his U.S. counterpart as a last resort to overcome the regime's internal crisis."

Some were more hopeful for a different result with the upcoming meeting.

Robert Galluci said, "This is a surprising and welcome development. If representatives of both governments can meet, and a summit ultimately is held, it would represent substantial progress in reducing tension and the risk of war."

Galluci served as the chief U.S. negotiator during the 1994 North Korean nuclear crisis.

There was no immediate reaction from China. However, the state-run Global Times published an editorial welcoming the talk.

It said, "China will welcome the dialogue between the US and North Korea, and resolutely support North Korea securing its due interests in the process of denuclearization. Through these efforts, China's interests will not be pushed aside."

American Senator Lindsay Graham of South Carolina expressed hope for peace. But he offered a warning to the North Korean leader.

He said, "A word of warning to North Korean President Kim Jong Un ‘the worst possible thing you can do is meet with President Trump in person and try to play him. If you do that, it will be the end of you and your regime."

milestone –n. an important point in the development of something

prestige –n. respect or attention someone or something gets for being successful or important

scrutiny –n. carefully examining someone or something in a critical way

engage –v. to be involved in, to take part in

elimination –n. the process of removing something

ambition –n. a goal or aim, something a person hopes to do or accomplish

gesture –n. something said or done to show a feeling or attitude

regime –n. a form of govenment