Update Required To play the media you will need to either update your browser to a recent version or update your Flash plugin.
By Hai Do
13 February, 2018


As the world follows North Korea's diplomatic offensive at the Winter Olympics, two young women could be sentenced to death. They stand accused in the murder of the half-brother of North Korea's leader.

It is a crime that involved the two Southeast Asian women, even if they knew nothing about it.

Kim Jong Nam was the target of a deadly attack one year ago in a crowded airport in Kuala Lumpur, Malaysia. He was a brother of North Korean leader Kim Jong Un and the eldest son of former leader Kim Jong Il.

Siti Aisyah of Indonesia and Doan Thi Huong of Vietnam are the only defendants in the murder case.

Malaysian officials accuse them of rubbing a cloth containing the nerve agent VX on Kim Jong Nam's face. The poison, developed for military use, is so strong that he was dead within two hours.

Kim was once seen as a possible leader for North Korea. But he fell out of favor with the country's leadership and moved overseas.

While Kim was not a political threat to Kim Jong Un, he may have been seen as possibly competing with his brother.

From the start of their trial last October, the two suspects have said they thought their actions were part of a trick for a hidden-camera, television show. They face a death sentence by hanging if found guilty.

A lawyer for the women says the lack of North Korean suspects in the case hurts their legal defense. He said, "As long as the North Korean suspects are away, the actual truth will never be proven. I sincerely believe that the girls should be acquitted because we have clearly shown that they are being used as scapegoats."

Both the defense and prosecution lawyers agree the women, coming from rural poverty, could not have been acting completely on their own. They believe that the crime was carried out as part of a plot by a group of North Korean agents. They think the agents sought out the women, then trained and supplied them with the VX nerve agent.

The Malaysian government even has a good idea who the suspected plotters are. Four North Koreans were seen on airport security cameras after the attack. They appeared to be changing their clothing and throwing away their belongings. A North Korean embassy official was believed to have helped the four men with flights out of Malaysia.

But Malaysian officials have not officially accused North Korea of involvement in Kim's death. Instead, they have focused narrowly on proving the women's guilt.

Prosecutors said the two women knew they were working with poison. They said airport video showed them moving quickly to the washroom and holding their hands away from their bodies after the attack. 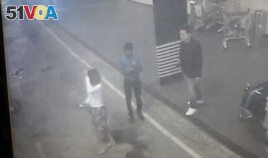 This image provided by Star TV of closed circuit television footage from Feb. 13, 2017, shows a woman, left, at Kuala Lumpur International Airport in Sepang, Malaysia, who police say was arrested Wednesday in connection with the death of Kim Jong Nam.

Trial to re-start next week

The trial is set to continue on February 22. Prosecutors are expected to rest their case by April or early May.

If the judge finds there is no case against the women, they will be freed. If he rules against them, the trial will continue for several more months. An appeal to higher courts could add several years.

James Chin is director of the Asia Institute at the University of Tasmania in Australia. He said, "The Malaysian government wants it all to go away by trying to rush the trial and end it."

Chin added, "Once everything is under the bridge, which will take years, Malaysia and North Korea will likely resume normal relations. The Kim Jong Nam case will be just another footnote in history."

Eileen Ng and Eric Talmade reported this story for the Associated Press (AP). Hai Do adapted their report for VOA Learning English. George Grow was the editor.

eldest – adj. of the greatest age

out of favor – expression. having or showing approval

acquit – v. to find someone not guilty

scapegoat – n. someone who is blamed unfairly for something

prosecution – n. the act or process of holding a trial against someone

rush – v. to do something in a hurry