After 19 Years, Japan Has a Sumo Grand Champion

Update Required To play the media you will need to either update your browser to a recent version or update your Flash plugin.
By Dan Friedell
25 January, 2017

The sport of sumo wrestling started in Japan over 1,000 years ago.

But the Japanese have not had a native sumo "grand champion," known as a Yokozuna, since 1998. Sumo wrestlers known as Yokozuna compete at the sport's highest level. 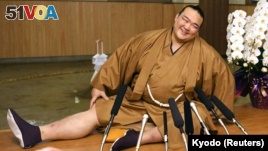 Kisenosato became the newest Yokozuna in Japanese sumo wrestling. He is the first Japanese wrestler to reach the sport's highest level in almost 20 years.

That changed on Wednesday when a wrestler known as Kisenosato won his first championship at the New Year Grand Sumo Tournament.

Kisenosato is a 30-year-old whose real name is Yutaka Hagiwara. He weighs 178 kilograms and stands 1.88 meters tall.

Over the past 20 years, all the sumo grand champions have been from Mongolia, Hawaii and American Samoa.

Usually, wrestlers must win two competitions back-to-back to become Yokozunas. But Kisenosato was recognized because of his latest victory and strong performances in recent events. Three other wrestlers currently compete at the Yokozuna level.

Kisenosato said he would do his best to honor his new classification.

A 2015 survey showed that sumo wrestling is still the most popular sport in Japan. But other sports, like baseball, soccer, boxing and golf are rising in popularity.

Sumo's popularity suffered recently because of reports of scandals, including stories of young wrestlers being treated poorly by their mentors.

Kisenosato's success is big news in Japan. One Facebook user published an image showing his photograph on the front of six different newspapers.

A Twitter user said the title of Yokozuna comes with a lot of responsibility.

"I am confident he will deliver."

What do you think of Kisenosato's promotion? We want to know. Write to us in the Comments Section or on 51VOA.COM.

mentor – n. someone who teaches or gives help and advice to a less experienced and often younger person

promote – v. to change the rank or position of (someone) to a higher or more important one

grand – adj. having more importance than others; large or striking