Knowledge Does Not Lead to Action on Environment

Update Required To play the media you will need to either update your browser to a recent version or update your Flash plugin.
By Christopher Cruise
27 August, 2014


Monty Hempel is a professor of environmental sciences at Redlands University in California. He studies ecological literacy -- or ecoliteracy, for short. Ecoliteracy is the ability to think about and understand the natural processes that make life possible.

Monty Hempel says ecoliteracy gives people knowledge about environmental problems. But he says it does not always work to get them to change their behavior.

"Ecoliteracy is a phrase invented to describe the kinds of knowledge that we need to operate sustainably in the society in which we live. And that means with the environmental life-support systems that provide sustenance for everybody, not just humans, but other species."

Mr. Hempel wrote part of the Worldwatch Institute's latest State of the World report. His chapter is called Ecoliteracy: Knowledge is Not Enough.

"Some people think that ecoliteracy is just a green form of science literacy. And what I have tried to ask is whether that's enough. In other words, what an ecologically-literate person needs to know might include things like the cycles and the flows, the energy systems, all of those kind of things that we would call the science of ecology."

In other words, he says, simply knowing about environmental problems does not lead people to do something about them. 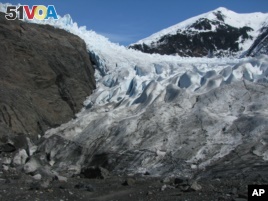 This April 19, 2013, file photo shows the Mendenhall Glaicer in Juneau, Alaska. More than two-thirds of the recent rapid melting of the world's glaciers can be blamed on humans. (AP Photo/Becky Bohrer, File)

He adds that people may not be very worried about environmental problems if they seem far away.

"Some people call it psychological distance. A lot of climate issues are worse in the Arctic and most of us don't spend time in the Arctic. And so, there's a certain distance. But there's also a distance that's happening in the world as it urbanizes -- people spending more time in front of screens and less time out in nature. We become, if you will, disconnected from the natural systems that used to be the key to success for a human being."

He says that, in the past, it would be hard for individuals to find food, water and shelter if they did not understand their environment.

Professor Hempel says learning about nature would help people balance their lives. And he says it might even help reduce the number of people in the United States who are overweight, especially children.

He adds that children should learn about nature in school.

"One of the things that I think ecoliteracy would help us do is to bring back -- through experience -- those wonders of encounters with wildlife, with other creatures than ourselves. And that that would actually contribute to our learning."

Most scientists agree our climate is changing. But Monty Hempel says there is not such agreement among non-scientists. He says too many decisions are affected by money and politics rather than science.

"How do we go back to a governance system that can actually use science to help us solve problems? That if we had a kind of system of governance that allowed us to incorporate what we know in science -- and to respond to it -- we would all be better off."

This story was based on a report by VOA science and health reporter Joe De Capua in Washington. It was written for Learning English by Christopher Cruise. It was edited by George Grow.

protecting – adj. to guard or defend something (or someone) against harm

ecological – adj. related to the environment

problems – n. questions or situations with unknown or unclear answers

overweight – adj. weight over and above what is considered normal or required

agreement – n. the act of agreeing