Update Required To play the media you will need to either update your browser to a recent version or update your Flash plugin.
By VOA
28 October, 2014


Officials from Iraqi Kurdistan said Tuesday that 80 Iraqi Kurdish fighters are on their way to Turkey. The officials say the fighters are armed with artillery and machine guns. They are to cross into Syria and help battle Islamic State militants for control of the town of Kobani. Another 72 fighters are expected to arrive Wednesday.

Mr. Modi said India would quickly set up a $100 million line of credit to permit Vietnam to get naval boats from India. 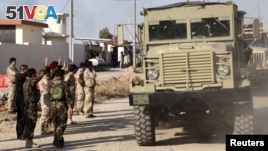 A convoy of Kurdish peshmerga fighters drives through Irbil after leaving a base in northern Iraq, on their way to Kobani, Syria, Oct. 28, 2014. (REUTERS/Azad Lashkari)

China is closely watching the increased partnership between its two neighbors. Vietnam and China dispute territory in the South China Sea. Vietnam wants to strengthen its coastal defenses.

Ukraine has condemned Russia's position on elections organized by pro-Russian separatists in eastern Ukraine. The elections are set for next Sunday, November 2.

Ukraine held national elections last Sunday, October 26. Officials in Kyiv said on Tuesday that Moscow's recognition of the vote could destroy chances of peace between the two countries.

A South Korean spy agency says that North Korean leader Kim Jong Un disappeared from the public for six weeks to have a foot operation.

The National Intelligence Service (NIS) told South Korean legislators that a foreign doctor flew to North Korea. The doctor reportedly operated on Mr. Kim in September or October. He had a cyst on his foot.

The North Korean leader reappeared earlier this month walking with the help of a cane.

condemn –v. to say a person or action is wrong or bad

cyst – n. an abnormal sac of fluid on or in the body

cane – n. a short stick that a person uses to help him or her to walk