Update Required To play the media you will need to either update your browser to a recent version or update your Flash plugin.
By Susan Shand and George Grow
29 September, 2017


The Iraqi government has placed a ban on international flights to airports in the country's Kurdish area.

The Kurds have ruled an autonomous area within Iraq since a United States-led coalition ousted Saddam Hussein in 2003. 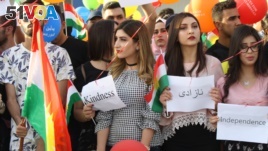 Some students say their dream of an independent state trumps fears that the independence vote could lead to crippling isolation in Irbil, Kurdistan Region of Iraq, Sept. 29, 2017.

In the referendum on Monday, 92.7 percent of voters supported a measure proposing creation of an independent Kurdish state. The results are not binding, but they are the first step in a process that leads to independence.

The lawmakers asked Prime Minister Haider al-Abadi to send troops to Kurdish-held Kirkuk to take control of its oil fields. They also urged him to enforce a decision to dismiss Kirkuk's governor for holding the vote.

The Iraqi parliament told the 34 countries with diplomatic offices in Kurdistan to close them down. It also called for the deployment of forces to areas that had been under Iraqi government control before Islamic State (IS) forces captured Mosul in June 2014.

"We will enforce federal authority in the Kurdistan region, and we already have started doing that," the prime minister said.

The Iraqi government had given the Kurdistan Regional Government (KRG) until 1800 hours, local time, to surrender control of its international airports at Irbil and Sulaimaniya. But KRG officials said they would not obey the order.

The Reuters news agency reports that at least two European carriers, Lufthansa and Austrian Airlines, will be cancelling flights to Irbil this weekend.

But the Associated Press reports that the director of Irbil airport said military, humanitarian and diplomatic flights from the airport will continue.

In a statement, Abadi said central government control of air and land ports in the area is not meant to starve and prevent the delivery of supplies to the Kurds.

In recent days, the prime minister has said he received calls from leaders from Britain, France, Iran and Turkey. His Twitter account said they all expressed support for Iraqi unity.

Turkey faces armed opposition from Kurdish separatists at home. The Turkish government has threatened to restrict oil sales to the Kurdish area, a move that could hurt its economy.

The United States has said the Kurdish movement in Iraq could destabilize the area and hurt the war effort against IS forces.

This story first appeared on VOANews. Susan Shand and George Grow adapted the report for Learning English. George Grow and Mario Ritter were the editors.

authority – n. having the power to control something or someone

destabilize – v. to cause something to be unable to continue to work or to exist

autonomous – adj. having the power or right to govern itself.

referendum – n. an election in which the people in an area vote for or against an issue of public concern

binding – adj. requiring someone to do something