Update Required To play the media you will need to either update your browser to a recent version or update your Flash plugin.
By Bruce Alpert
24 July, 2017

He spoke behind closed doors with staffers for the Senate Intelligence Committee for more than two hours. But before his appearance, Kushner's representatives released an 11-page statement prepared for the committee.

In the statement, Kushner said he met with Russian officials four times during last year's presidential campaign. But Kushner said he did not collude with officials connected to Russia or any other foreign government.

To collude, means to work with others secretly, particularly for something illegal or dishonest.

Kushner spoke to reporters from the White House after his meeting with Senate Intelligence Committee staffers.

"Let me be very clear -- I did not collude with Russia, nor do I know of anyone else in the campaign who did so. I had no improper contacts. I have not relied on Russian funds for my businesses. And I have been fully transparent in providing all requested information. Donald Trump had a better message and ran a smarter campaign, and that is why he won. Suggesting otherwise ridicules those who voted for him."

Kushner did not answer reporters' questions.

In the statement to staffers for the Senate Intelligence Committee, Kushner said he did not know a June 9, 2016 meeting was set up to provide damaging information about Hillary Clinton.

Trump's eldest son, Donald Trump Jr., had released emails that he sent to Kushner and campaign manager Paul Manafort about promises for damaging information about Clinton.

Kushner said the meeting with Russian lawyer Natalia Veselnitskaya, Trump Jr., and Manafort was a waste of time.

Kushner said he arrived late for the meeting. When he heard discussions going on about a ban on U.S. adoptions of Russian children, he determined "my time was not well-spent at this meeting."

"I actually emailed an assistant from the meeting after I had been there for 10 or so minutes and wrote, "Can u pls (short for please) call me on my cell? Need excuse to get out of meeting." 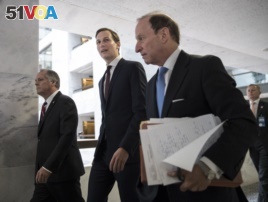 In the statement, Kushner also confirmed that he had three other meetings with Russian officials and representatives.

Kushner is to answer questions from the House Intelligence Committee on Tuesday. Like the Senate intelligence meeting, it will not be open to the public and reporters.

In his written statement, Kushner repeated what his lawyers had said earlier -- that his report on contacts with foreign officials was incomplete. The mistake was turned in before it was ready -- a result of "a miscommunication," Kushner said.

Meetings with foreign officials are not unusual for top aides to a candidate, particularly after the candidate wins a presidential election. But Kushner's meetings drew interest because he had not disclosed them as part of information required for security clearance and because of reports of Russian interference in the U.S. presidential election.

Besides congressional investigations, Special Counsel Robert Mueller is also looking into possible collusion between the Trump campaign and Russia.

President Trump went on Twitter Monday to say that the investigations are a waste of time. He called it "the phony Russian Witch Hunt,"

Michael Bowman and Chris Hannas reported on this story for VOA News. Bruce Alpert adapted this story with additional reporting from the Associated Press, Reuters and other sources for Learning English. Hai Do was the editor.

collude - v. to work with others secretly especially in order to do something illegal or dishonest

ridicule - v. the act of making fun of someone or something in a cruel or harsh way

contacts - n. people you know or meet with

transition - n. the putting together a government after a candidate wins an election but before he/she takes office

impactful - adj. having a big effect