On Independence Day, A Love Letter to Black America

Update Required To play the media you will need to either update your browser to a recent version or update your Flash plugin.
By Kelly Jean Kelly
03 July, 2019


The Fourth of July is Independence Day in the United States. On this holiday, Americans often remember their country's founders – the English colonists who separated from Britain.

But in a new book, writer Kwame Alexander urges readers to remember all the people who built the country.

"Is there one voice in America? No, there are many voices. And the idea is that we have to recognize, acknowledge, be proud of, pay tribute to all those voices." 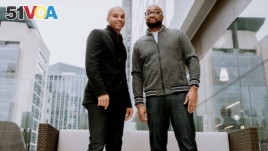 His book is called "The Undefeated." It is a love letter to America -- to Black America, Alexander told VOA. Most pages include oil paintings by artist Kadir Nelson.

The pictures also show people whose names we do not know: a family, a soldier and bodies crowded onto a slave ship.

"But they represent a community, a culture, a people. They represent America and that's what I was trying to say. That this is America. As Langston Hughes said, ‘I, too, sing America.'"

Like Langston Hughes, Kwame Alexander is a poet. On a recent visit to VOA, Alexander talked about growing up in both the city and the country. His words create a picture of two very different places in the United States.

He says both experiences helped make him who he is. One thing the two parts of his life had in common were books.

"Books were everywhere in our house. And I think that gave me and my sisters this feeling that anything was possible. That the world was within our reach. We could travel anywhere without having left our home through the pages of a book."

As an adult, Alexander traveled not only through books, but in real life. He often traveled to Ghana.

"And on one of my visits, I noticed that there were no books in the school and there was certainly no library because there were no books. Again, being someone who is in the business of words and understands the power of literature to transform lives, I said, ‘I want to build a library for these students.'"

So for several years, Alexander raised money and found books for a library. The building was nearly complete. But then Alexander realized something important.

"It occurred to me that I never asked anyone in the village what they wanted."

The elders in the village told him what they most needed. And in 2018, the project opened as the Barbara Alexander Memorial Library and Health Clinic. It combined both books and medicine, care for both the mind and the body.

"I think that was probably a big part of my life's work. It's one thing to write books. I think it's important if you're going to write about something that's authentic, you sort of gotta live an authentic life."

And some parts are simply human.

acknowledge - v. to say that you accept or do not deny the truth or existence of something

tribute - n. something that you say, give, or do to show respect or affection for someone

authentic - adj. real or genuine : not copied or false