Update Required To play the media you will need to either update your browser to a recent version or update your Flash plugin.
By Marsha James
25 January, 2015

The Thai government is taking steps to stop the abuses. But problems remain for an industry long dependent on low-cost labor.

Thailand is the third largest exporter of fish and fishery products in the world. Those exports are worth more than eight billion dollars. But the Thai fishing industry is under attack because of reports of labor rights abuses and human trafficking. Many of the workers come from Cambodia and Myanmar, also known as Burma.

The American-based Human Rights Watch produced a report on the Thai seafood industry. The report says labor shortages have led the seafood industry to turn largely to foreign workers. It says recruitment dealers have targeted men from Cambodia, Myanmar and even Thailand. 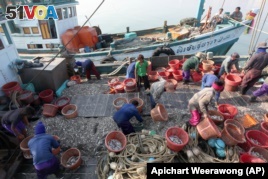 Phil Robertson is deputy Asia director of Human Rights Watch. He says some men were forced to work in the fishing industry. He says they reported threats of violence and abuse on fishing boats.

"We continually see problems of physical abuse by captains and other officers. Every group of fishermen that Human Rights Watch has talked to said they had seen captains, beating, abusing and in some cases killing fishermen. The fisherman falls asleep, is sick, is injured. They are compelled to keep going; they can't stop work. We found beatings with tools, with stingray tails, also shootings."

Fishermen face long working hours. Some work up to 20 hours a day. There is little time to rest or eat. Only when fishing nets are down in the water and after the fish are caught and sorted can the workers rest.

A Thai labor department proposal to employ prisoners on boats to make up for labor shortfalls was rejected after an international outcry.

Patima Tungpuchayakul is with the Seafarers Action Center and Labor Rights Promotion Network Foundation. She says some of those trafficked say they were drugged before being put on boats. She says many received little or no pay. She also says the conditions on boats often make people want to leave.

She says people have appealed to return home after being at sea up to three years. Identification documents and passports are often withheld or thrown into the sea. Many workers fear death if they stay on the boat. So they instead jump ship to survive.

She says many bodies of fishermen had been uncovered in Indonesia. At least nine Thais were confirmed dead. Thirty workers from Myanmar were also found.

Wanchai Penjabat travelled to Indonesia. He says the need for labor is so great that recruiters turn to children and older adults to fill job vacancies on boats.

He says those tricked into working on the boats work like slaves, or worse than slaves. There are long hours of work. And for many, the conditions are what he calls ‘unendurable'.

Phil Robertson says Thailand's international image in the seafood industry is at stake.

"Overseas the reputation of Thai seafood is now really brought into disrepute. There are many different companies who are sourcing (seafood) from Thailand, now looking at how‘we' ensure that the fish products that ‘we're' buying here or the shrimp being raised on fishmeal is not tainted with forced labor and trafficked persons sweat and tears."

The Thai government has reacted with a campaign to end human trafficking and abuses. Steps include a tightening of rules in the fishing industry and increasing the lowest legal age for workers to 18 years.

The government will also register all boats and require vessel monitoring systems on all boats by February.

Rights workers say they welcome the legislation and the steps to fight trafficking. But they add the laws will need to be enforced to be really effective.

This report was based on a story from reporter Rob Corben in Bangkok. Marsha James wrote it for VOA Learning English. George Grow was the editor.

recruit – v. to persuade (someone) to join you in some activity or to help you

shortfall – n. a failure to get what is expected or needed

outcry – n. an expression of strong anger or disapproval by many people

vacancy – n. a job or position that is available to be taken