Update Required To play the media you will need to either update your browser to a recent version or update your Flash plugin.
By John Russell
04 November, 2017


Millions of people worldwide have been reported missing.

Many of them went missing as a result of armed conflicts, such as the war in Syria, or in other places of violence. 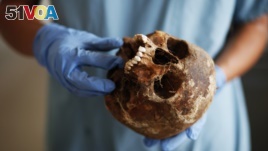 FILE - A forensic expert of the International Commission on Missing Persons (ICMP)works on trying to identify the remains of a victim of the Srebrenica massacre, at the ICMP centre near Tuzla July 9, 2012.

A new laboratory equipped with the latest technology seeks to help the families and friends of the missing.

In late October, the International Commission on Missing Persons, or ICMP in The Hague opened a laboratory to help identify missing individuals.

The lab is the latest effort for an organization that was established after the Srebrenica massacre. More than 8,000 Bosnian men and boys were killed after Bosnian Serb forces captured the town of Srebrenica in 1995. It is the only incident in the Bosnian conflict to be defined by two United Nations courts as genocide.

Since its creation, the International Commission on Missing Persons has identified 20,000 human remains and provided evidence in 30 criminal trials. It now helps to identify people who have been reporting missing during conflicts, natural disasters, or migration.

The group recently helped Ingrid Gudmundsson confirm that her pregnant daughter and her one-year-old granddaughter were killed in the 2004 Indian Ocean Tsunami. They went missing after the huge wave struck the coast of Thailand, where they were staying.

Gudmundsson said it was important to know for sure what happened to them.

"You know, when you don't know where they are, when they are just missing, you - in your head – you always have some kind of hope even if your intellect tells you that it's impossible."

Scientists working at the laboratory say the new technology can identify people with a very small amount of DNA from a piece of bone. DNA carries genetic information in the cells of people, animals and plants.

Rene Huel is a scientist at the lab.

"What we do is cross-compare against the family samples in these massive databases. So we do this large-scale kinship comparison."

Human Rights activists hope the laboratory will help bring to justice to those guilty of war crimes.

Muhamad Abulhusun is a refugee and rights Activist.

The commission's director general, Kathryne Bomberger, noted that the group is also active in helping victims of abuse and violence.

Zlatica Hoke reported on this story for VOA News. John Russell adapted her report for Learning English. George Grow was the editor.

migration – n. the act or processing from place to place

kinship – n. the state of being related to the people in your family