Update Required To play the media you will need to either update your browser to a recent version or update your Flash plugin.
By Bryan Lynn
05 October, 2019


The creator of a popular mixed dog, the labradoodle, has expressed great regret at inventing the breed 30 years ago.

Australian Wally Conron was working as a breeder of guide dogs in 1989 when he received a special request. A blind woman needed a guide dog but her husband was allergic to Labrador retrievers, a breed commonly used to assist humans.

Conron got to work. He carried out tests on more than 30 poodles. Such dogs do not cause allergy problems because they have short, non-shedding fur. Conron's aim was to find a poodle that would be an acceptable guide dog.

But his efforts were unsuccessful. He said all the ones tested had either physical problems or behavior issues that ruled them out as guide dogs. 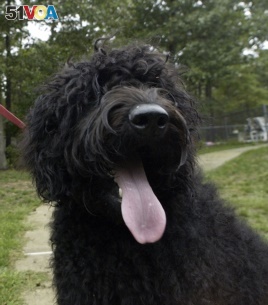 So he got the idea to crossbreed a Labrador retriever with a poodle. Conron found the crossbreed to be the perfect dog for the couple.

But today, Conron has major regrets about starting the breed. He recently spoke about his feeling toward the labradoodle in a podcast produced by the Australian Broadcasting Corporation.

Conron noted that the dogs have developed problems related to poor breeding history. Years ago, he said he had no idea the dogs would grow to become so popular throughout the world.

"I opened a Pandora's box and released a Frankenstein monster back in the 80s," Conron said on the program.

Conron's breeding was successful and his experiment resulted in three puppies – the world's first labradoodles. One of the three tested non-allergic. That puppy was sent to his new home in Hawaii, where the blind woman lived with her husband.

Conron said he was surprised at how difficult it was to find anyone to take the other two puppies. Many people did not like that they were crossbreeds.

So Conron decided to create a special name for his creation: labradoodle. He went to the media to get publicity for this new dog. "It was a gimmick," he said on the podcast. "They were crossbred, nobody wanted them. But everybody wanted a labradoodle. Same dog, different name."

What followed was a flood of publicity and requests for labradoodles from all over the world. Demand for labradoodle breeders grew. Famous people – including Jennifer Aniston, Tiger Woods and Christie Brinkley – became proud labradoodle owners. Even President Barack Obama's family considered a labradoodle before choosing a Portuguese water dog for the White House.

Conron said he is saddened that irresponsible breeding has led to problems for many labradoodles. He said he believes that most of the dogs "are either crazy or have a hereditary problem."

He did, however, add that he has come across some nice labradoodles that are similar to the ones he bred in the past. "But they are few and far between," he added.

The Australian Labradoodle Association of America addressed Conron's comments in a statement on Facebook. The group said the labradoodle is a much more developed dog today than it was back in 1989.

The organization admitted that irresponsible breeding does happen. Some breeders ignore health or breed standards. The group urges people seeking labradoodles to go through registered breeders who keep records on their dogs.

The organization said many labradoodle owners enjoy the dogs because they are very friendly and "highly social with their humans." These qualities, combined with being non-shedding and allergy-friendly, make the labradoodle a good choice for many American families, it added.

Bryan Lynn wrote this story for VOA Learning English, based on reports from the Australian Broadcasting Corporation, the Associated Press and Facebook. Ashley Thompson was the editor.

breed – n. a type of animal

allergy– n. medical condition in which your body reacts badly to something that you eat, breathe, or touch

Pandora's box – n. something that creates a lot of new problems that you did not expect

gimmick – n. something invented esp. for the purpose of attracting attention and that has no other purpose or value

hereditary – adj. having genes passed on from parents to children