Update Required To play the media you will need to either update your browser to a recent version or update your Flash plugin.
By Caty Weaver
21 March 2021

That honor has gone to the Labrador retriever for 30 straight years. But a new report from American Kennel Club, a registry of purebred dogs in the United States, shows the French bulldog is now nipping at the Labrador's heels.

Every year, the AKC releases a list of the most popular purebred dogs in the U.S. The Labrador retriever did keep its number-one position on the 2020 list, which the AKC released Wednesday. But French bulldogs are now the Labs' closest competition, after jumping from fourth place to second last year. 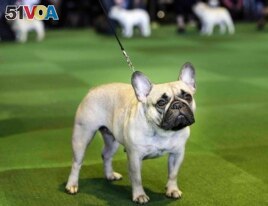 FILE - In this Feb. 16, 2015, file photo, a French bulldog competes at the Westminster Kennel Club show in New York. The French Bulldog is among the top ten popular breeds for 2020. (AP Photo/Seth Wenig, File)

The French bulldog has short legs and a thick body. Its nose and mouth look as if they have been pushed up and flattened on its face. Frenchies have short hair and big, round eyes.

They do have some limitations, however.

AKC spokesperson Brandi Hunter says French bulldogs are not the best for long walks or other high-energy activities. But she said they are a good choice if you want a dog that will "snuggle up" with you.

Immediately following the French bulldog on the popularity list are German shepherds. In fourth place is the golden retriever. Bulldogs, poodles, beagles, Rottweilers and German shorthaired pointers, in that order, make up the next five positions on the list. And the 10th most popular purebred dog in America is the Dachshund, a long-bodied and short-legged canine that some say looks like a hot dog. The breed had not appeared in the top 10 since 2013.

Labs still remain most popular by a wide lead. More than 98,300 Labs joined the AKC's registry last year, compared to about 66,500 French bulldogs.

German shepherds are solidly popular at the number three position. And, the breed is enjoying a little more attention than usual. American President Joe Biden and his wife Jill are the owners of German shepherds Champ and Major.

The dogs moved to Washington in January. However, earlier this month, Major lightly bit a Secret Service agent at the White House. Both dogs are temporarily back at the Biden family home in Delaware. The agent was not badly injured.

The yearly competition takes place in June in New York City. However, COVID-19 has led organizers to move the 2021 show to an outdoor area in Tarrytown, New York.

More than 190 breeds recognized by the AKC are included in the popularity list. Two new breeds entered the list in 2020.

The dogo Argentino entered the list at number 93. And a breed called barbet placed 145th.

Bringing up the rare

The rarest AKC registered breed in America is the Norwegian lundehund. The middle-sized dog has dense fur and pointy ears. It was bred to hunt birds called puffins.

The lundehund is unusually skillful. It can bend its body more fully than any other breed. This helps it enter narrow passages in cliffs where the birds take shelter. The dog can also climb extremely steep rocks.

But its strangest quality? The Norwegian lundehound has six fully formed toes on each foot. Some of them have even more than six.

cute –n. having a pleasing and usually youthful appearance

purebred –n. an animal that has parents of the same breed

hot dog –n. a small cooked sausage that is mild in flavor and is usually served in a long roll

steep –adj. almost straight up and down: rising or falling very sharply