Update Required To play the media you will need to either update your browser to a recent version or update your Flash plugin.
By Dan Novak
24 May 2022


Africa's Great Green Wall is a project to build an 8000-kilometer-long forest across 11 of the continent's countries. The project is meant to contain the growing Sahara Desert and fight climate change.

But there has been a lack of financial support and political desire to move forward with the project. There has also been rising insecurity tied to extremist groups al-Qaida and the Islamic State in Burkina Faso that is hurting progress.

Just 4 million hectares of land have been turned into forest since work on the Green Wall began 15 years ago. That is only 4 percent of the program's goal. 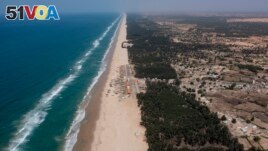 Adama Doulkom organizes the Great Green Wall for the Sahara and the Sahel Initiative for Burkina Faso. He said political instability and security issues are greatly slowing progress in nearly 4,000 villages across the country.

Much of the Sahel area to be used for the Green Wall has many security problems. That also impacts efforts in Sudan, Ethiopia, Mali, Chad, Niger and Nigeria.

The United Nations desertification agency says the Green Wall project faces many problems. They include limited political support, lack of money, weak organizational structures, and not enough consideration for the environment.

Desertification, the process by which fertile land becomes desert, has severe impacts on food production and is worsened by climate change. The U.N. says up to 45 percent of Africa's land is impacted by desertification, worse than any other continent.

First proposed in 2005, the project aims to plant a forest from Senegal on the Atlantic Ocean in western Africa to Eritrea, Ethiopia and Djibouti in the east. Supporters hope that the project will create millions of green jobs in rural Africa. It could also reduce levels of climate-related migration in the area and capture hundreds of millions of tons of carbon dioxide from the air. Several countries have struggled to keep up with the demands of the project.

A report released recently by the Stockholm International Peace Research Institute also noted the link between environmental damage and conflict. "In the Sahel, social tensions combined with inadequate governance and environmental decline to produce a bigger security risk," it said.

Despite the many problems, those involved in the project remain hopeful. The coordinator of the Great Green Wall, Elvis Tangem, told the Associated Press that while conflict has slowed down the progress of the project, it has also opened up newer opportunities.

Some progress has been made in recent years in the east of the continent, said the program's office in Addis Ababa. Eritrea, Ethiopia, and Sudan have all expanded their efforts. Ethiopia is producing 5.5 billion seedlings leading to thousands of hectares of restored land. Efforts in Eritrea and Sudan have also resulted in nearly 140,000 hectares of newly planted forest.

Between $36 and $43 billion are needed to create the Green Wall by 2030, estimates the World Resources Institute (WRI). The African Development Bank promised $6.5 billion for the wall by 2025 during the U.N.'s climate conference in November last year. In early 2021, France promised $14.5 billion for the project, still far short of the WRI's estimate.

instability— n. the state of being likely to change

desertification — n. the process by which an area becomes a desert

inadequate — adj. not enough or not good enough

coordinator— n. a person who organizes people or groups so that they work together properly and well