Update Required To play the media you will need to either update your browser to a recent version or update your Flash plugin.
By VOA
27 September, 2014


More than 700 residents crowd onto a small piece of land in Rwamutonga, a small village outside Hoima. The people say they have been unfairly forced from their homes and abused after a land dispute with their neighbor, Joshua Tibagwa.

In August, a court awarded him the rights to the land after a long legal battle.

A business called McAlester Energy Resources has expressed an interest in Mr. Tibagwa's land. He says the American company gave him money to secure the property. McAlester says it plans to use the land for a petroleum waste water facility. After the judgment, an eviction notice was quickly sent out. The court ordered people to leave the area.

Residents say they awoke to a combination of bullets and teargas on August 25th. They say their homes were attacked and burned a short time later. The residents fled the area to escape. They say three children went missing during the unrest. They say all three are believed to be dead. 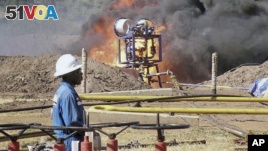 In this 2010 file photo, an oil well undergoes testing in the Lake Albertine region of western Uganda.

A wired fence now blocks off 1,000 hectares of land – almost 10 times more than the court mandated. Armed private security guards are on duty in the area. They are working for Joshua Tibagwa. The displaced say the guards are a threat to them.

Andriko Lino once lived on the land. He says he went back to his farm to get food for his children. While doing so, he says he was observed by guards and detained.  He says the guards set his house on fire with him trapped inside. He says he was seriously burned, but was able to force his way out.

Two displaced women say they have been raped. One of them says the guards detained her as she was attempting to get fresh cassava from her land. She says four men pushed her to the ground and raped her. She says she did report the incident to the police. She had no money to see a doctor.

In nearby Katanga, there is a written record at the police station that a woman reported the rape, but her papers could not be found.

Local community leaders say the displaced residents have zero access to medical aid and are not getting enough to eat.

The government has a different story.

Ambrose Mwesigye is the district's police commissioner.  He says these people were hostile residents, who have repeatedly attacked police. He accuses the displaced residents of saying bad things about Tibagwa and McAlester.

"We have received these complaints you are hearing about, all these allegations, not in writing.  And we have said, bring us those facts, and we start from there.  Police has not given us any feedback that people were mishandled.... I can tell you, these people are being organized to raise public outcry because of the story behind the story..... What I can tell you is the process of the eviction was peaceful."

Bernard Akankwasa is a police commander. He says the evictions were handled peacefully. He accuses residents of burning down their own homes to make it appear as though a crime took place.

Community leaders, local land commissioners, and security officials all agree something must be done to correct this situation.  But the government has not made any plans.

*This story came from reporter Lizabeth Paulat, in Hoima, Uganda. Marsha James adapted it for VOA Learning English. George Grow was the editor.

dispute - n. a disagreement or argument

facility – n. something that is built for a specific purpose

judgment - n. an opinion or decision that is based on careful thought

mandate - n. something that hangs or spreads out over an area

displace - n. to force people to leave the area where they live

detain - v. to hold or keep (someone) from leaving a place

access – v. to be able to use, enter, or get near (something)