Update Required To play the media you will need to either update your browser to a recent version or update your Flash plugin.
By Bryan Lynn
23 October, 2018


A new study has found that young babies learning languages through video materials do better with other babies around than they do alone.

The study confirms earlier studies that found a child's learning can be greatly improved when it happens together with another child.

The study was published earlier this month in the Proceedings of the National Academy of Sciences. It included United States-based researchers from the University of Connecticut and the University of Washington.

In general, very young children are able to learn languages much faster than older children or adults. But researchers say there are still many unanswered questions for why this happens.

In the new study, researchers wanted to build on earlier studies that looked at the effectiveness of using video material in language learning for very young children. Past research has shown that a young child's learning level using video is very low compared to language spoken in a live presentation by humans. 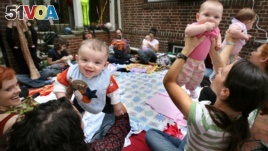 Parents and their infant children enjoy a music appreciation and therapy lesson held by parent Randi Madrid at her home in the Queens borough of New York, Monday, Oct. 12, 2008. (AP Photo/Craig Ruttle)

One of the earlier studies measured the progress of 9-month-old children who listened to Mandarin Chinese during a series of visits to a learning laboratory.

The study measured the ability of the children to recognize differences in Mandarin speech sounds that they heard. The children who listened to recorded Mandarin did not experience the same learning progress as those who received a live social presentation.

Those results suggested that the language-learning process "does not require long-term listening and is enhanced by social interaction," the study stated.

In the new study, researchers wanted to see if language learning through video would be improved if the child went through the process with another child instead of by themselves. The experiment involved 9-month-old children who listened to Mandarin-language videos.

This time, the children were permitted to interact with a video screen. The children could touch different parts of the screen to control the presentation of Mandarin video clips they saw. The researchers noted that the babies were "quick to learn" that touching the screen would activate a video.

The researchers watched the children for signs of behavioral and brain reactions to measure their skill level of processing language sounds.

They reported finding brain-based evidence that clearly showed a higher level of language learning among the children who took part in the experiment with another child. In addition, the study found that putting the children together with new, unfamiliar partners led to even higher learning results.

Patricia Kuhl co-led the study. She is a professor at the University of Washington and heads the Bezos Family Foundation for Early Childhood Learning. She told Science Daily that the study demonstrates the importance of working with a social partner to improve language learning.

Working with others - even at such a young age - "increases arousal," which in turn leads to increased learning, Kuhl said. "Social partners not only provide information by showing us how to do things, but also provide motivation for learning," she added.

The researchers said the results show that the increased learning only appeared related to the social interaction between children.

They did not find clear links between higher learning levels and the amount of viewing time or number of videos watched. Learning improvement was also not directly affected by how many times the screen was touched or how much movement ability a child had, the study found.

enhance – v. to improve something

interaction – n. the activity of talking or doing things with other people

unfamiliar – adj. not known to you

arousal – n. making someone have a particular feeling or reaction

motivation – n. the enthusiasm, need or reason for doing something