Language Variation in the US

Update Required To play the media you will need to either update your browser to a recent version or update your Flash plugin.
By Faith Pirlo
26 May 2022


Today on Everyday Grammar, we will explore some differences in American English spoken in different regions, or parts of the country.

The United States is a large country, and there are areas where people use different words for the same thing or say the same words differently. 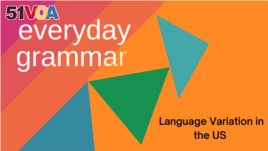 Let us look at some vocabulary and pronunciation differences from different regions of the United States.

One of the main features of different regional varieties of American English is vocabulary. Different words can be used for the same idea or concept, depending on the region of the U.S., such as the Northeast, the South, the Midwest or the West.

Take for example a kind of cloth shoe that is worn for informal times or for sports. What would you call this?

Many Americans in the South, Midwest, and the West Coast call sports shoes "tennis shoes." It does not matter if they play the sport of tennis. The shoes just might be their everyday shoes. They call them "tennis shoes" anyway. In parts of the Northeast and some parts of southern Florida, they use the word "sneakers."

Sugary, carbonated drinks have different names depending on where you are from.

In the Midwest, the western part of the state of Pennsylvania, and parts of the Appalachian Mountains, especially in the state of West Virginia, people call the drinks "pop."

In parts of the Northeast and the West Coast, they are called "soda." In addition, people in some southern states use one name for all those kinds of sugary drinks. They call it "Coke," which is short for Coca Cola.

For our final vocabulary word, we have the insect that flies at night in the summertime and lights up. In parts of the Northeast and West coast, the word "firefly" is commonly used. In parts of Appalachia, the Midwest, and the South, "lightning bug" is probably most common. Sometimes people in the U.S. use both words.

In the U.S., people say some of the same words in different ways, depending on where they grew up.

Take for example a small stream of water that flows into a river. Most Americans say this word as "creek" with a long /ee/ sound, like in the word "beet."

But in some parts of Appalachia like western Pennsylvania, West Virginia, and the Ohio Valley, you might hear this word with a /i/ sound, as in "creek," like in the word "tip."