When Did Whales Get So Large?

Update Required To play the media you will need to either update your browser to a recent version or update your Flash plugin.
By Dan Friedell
24 May, 2017

Three million years may seem like a long time. But when you consider that planet Earth is more than 4.5 billion years old, it is a pretty short period of time.

And it is over that shorter time period that the whales in our oceans today got to be so large.

The blue whale is the largest animal that has ever lived. They weigh more than even the biggest dinosaurs. They can grow to 30 meters long and weigh up to 130,000 kilograms.

Blue whales are part of the baleen whale family. Baleen is a kind of food-filtering structure in the mouths of the whales. The whales developed this system about 30 million years ago.

Other whales in the baleen family include fin whales, bowhead whales, and right whales. Today, these whales can weigh well over 70,000 kilograms. 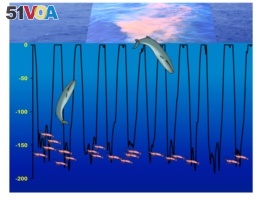 Huge blue whales dive more than 150 meters to feed on tiny krill. (Credit: Frontiers in Ecology and the Environment)

But for millions of years, they were not nearly that large, scientists say.

"All of a sudden – ‘boom' – we see them get very big, like blue whales," scientist Nick Pyenson told the New York Times. He and other researchers recently published an article on whale size in the British research journal Proceedings of the Royal Society B.

"It's like going from whales the size of minivans to longer than two school buses," Pyenson added.

The researchers -- Pyenson, Jeremy Goldbogen and Graham Slater -- believe that a change in the Earth's climate caused whales to get so large only about 3 million years ago.

An oncoming ice age made the ocean water cold. High winds mixed the water in the ocean faster than before. Rain and snow made more nutrients run off from the land into the water. The nutrients resulted in algae. That attracted small fish and shrimp called krill.

The mixture of nutrients resulted in more food for large whales to eat.

Whales that were able to quickly eat a lot of food survived. And they got larger. Whales that had teeth instead of baleen, however, did not survive.

The largest baleen whales then produced other large whales.

Over the next three or four million years, the baleen whales grew 10 times bigger than they had been, the researchers say.

It is possible that the largest whales are gone, the researchers said. But, as they told the BBC, blue whales could grow even bigger -- or they could slowly die – depending on Earth's changing climate.

Dan Friedell wrote this story for VOA Learning English based stories by NPR, The BBC and Popular Science. Ashley Thompson was the editor.

Do you think the large whales will return? We want to know. Write to us in the Comments Section or on 51VOA.COM.

baleen – n. cartilage that filters food and water from the mouths of large whales

filter – n. a device that is used to remove something unwanted from a liquid or gas that passes through it