Update Required To play the media you will need to either update your browser to a recent version or update your Flash plugin.
By Susan Shand
17 September 2021


Most of the largest public universities in the United States do not have a mandate, or official order, that students be vaccinated against COVID-19. Some schools say they require vaccines but permit some students to refuse it. Others have refused entry to those who are not vaccinated.

The new school year is beginning as the delta variant continues to spread in many parts of the country. University officials and teachers believe high vaccination rates are the way to return to normal school life.

In some cities and states, leaders have made it illegal for schools to have vaccine mandates. In such places, schools are using unusual ways to get more students vaccinated. 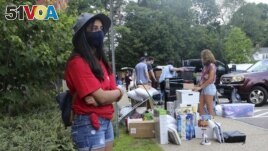 UConn sophomore Sahiti Bhyravavajhala assists students moving into Shippee Hall on the Storrs, Conn. campus, Friday, Aug. 27, 2021. UConn is one of many schools across the nation mandating that returning students be vaccinated against COVID-19.AP Photo/Pa

Research by The Associated Press shows that 26 of the nation's 50 largest public universities are not requiring vaccination. That means about 55 percent of public university students can make a choice.

Here is a look at three public universities and what they are doing to urge more students to get vaccinated.

The University of Connecticut

At the University of Connecticut, students are required to be vaccinated. But the school has permitted 800 exemptions, or exceptions to the requirement. It has not denied a single request for an exemption.

University officials are working with students who have not been vaccinated to understand the reason for their decision, said Dr. Andrew Agwunobi. He is the university's interim president. He is also a pediatrician – a doctor whose expertise is treating children.

The school set up areas for students to get vaccinations when they arrive at the school. Among those who asked to be vaccinated was graduate student Cindy Barreto, who said it was hard to get an appointment back home in Brazil. Her brother was hospitalized in intensive care with the virus.

"I know people who are waiting to get the vaccine, and I would say don't do that," she said.

About 90 percent of classes at the university are expected to be in person this term. All students must wear face coverings indoors. Those who remain unvaccinated must receive weekly COVID-19 testing.

University officials say 97 percent of their students are vaccinated. They say only 10 COVID-19 infections have been recorded since the school year began.

The University of Central Florida

An executive order from Florida's Republican Governor Ron DeSantis has made vaccine mandates in schools illegal. So, the University of Central Florida is doing some unusual things to get students vaccinated. It is giving out prizes.

Many professors are concerned for their safety because they don't know which students are vaccinated, said Joseph Harrington. He is a physics professor and head of the teachers' association. He is also part of a group of teachers asking the governor to let schools set their own policies.

"There are some large classes where students are sitting in the aisles because they're afraid to sit next to other students," Harrington said.

In the first week of classes, research showed 72.6 percent of those questioned had at least one vaccine dose, university spokesman Chad Binette said. He said the school is giving out prizes such as free books, computers and tuition money.

The university says about 12,000 of its 72,000 students live on school property. It is recommending face coverings for everyone.

The university has reported 377 COVID-19 infections among students over the last two weeks.

The University of Virginia

Students at the University of Virginia who do not get vaccinated cannot attend classes unless they receive a religious or medical exemption.

At the start of the school year, 193 students were unenrolled for the term because they were not vaccinated, said Dr. Christopher Holstege. He is the director of student health and wellness. He said the policy is the same as with vaccinations for other diseases, such as measles.

Susan Davis is vice president for student affairs at the University of Virginia. She said all of those who were unenrolled would be welcomed back for the next term if they follow the mandate.

About 97 percent of the school's 25,000 students and 92 percent of staff members were vaccinated, officials said.

So far, the school has reported 255 COVID-19 cases among students. It is offering more than 90 percent of classes in person.

Mallory Griffin, a senior at the university, said most students do not have a problem with the vaccine mandate.

"We're glad that everybody is vaccinated or getting vaccinated, Griffin said, "because that just brings us one step closer to hopefully being able to return completely to normal."

staff - n. a group of people who work for an organization or business

unenroll - v. to remove someone as a member of or participant in something