Update Required To play the media you will need to either update your browser to a recent version or update your Flash plugin.
By Dan Friedell
21 June 2022

A team of scientists from the research group Wonders of the Mekong quickly came to measure and photograph the fish. Zeb Hogan is the group's leader. He observed it is hard to find such a large fish in freshwater, saying, "so I think all of our team was stunned."

Hogan added, "The fact that the fish can still get this big is a hopeful sign for the Mekong River." 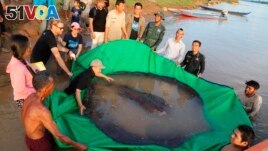 A local fisherman caught the 661-pound (300-kilogram) stingray, which set the record for the world's largest known freshwater fish and earned him a $600 reward. (Chhut Chheana/Wonders of the Mekong via AP)

The Mekong runs through China, Myanmar, Laos, Thailand, Cambodia and Vietnam. It is home to many different types of large freshwater fish.

The previous record for freshwater fish was a catfish. It was also caught in the Mekong, but in Thailand, in 2005 and weighed 293 kilograms. The Cambodian fisherman caught the record-breaking stingray near Stung Treng in the country's northeast.

Some fish spend part of the time in freshwater and some time in saltwater. As a result, large fish like beluga sturgeon and bluefin tuna do not qualify for the freshwater fish record.

Hogan said large fish are endangered around the world. They are caught because of their size and can be sold for a lot of money. They take a long time to grow and sometimes they are caught before they can reproduce. Hogan said big fish also need large areas of water, such as long rivers or deep lakes to survive. They also can be hurt by projects that change the movement of rivers, such as dams.

"So about 70 percent of giant freshwater fish globally are threatened with extinction, and all of the Mekong species," Hogan said.

The researchers planted a tracking device near the tail of the stingray before releasing it. The device will send information to help scientists learn its behavior.

Hogan said the giant stingray is "a very poorly understood fish," and noted that even its name has changed many times in the last 20 years. The scientists hope to be able to follow its movements and learn more about its life, where it spends time and what it interacts with as it moves through the river.

The researchers say the record stingray is the fourth large female seen in the area in the past two months. So, they believe it could be a place where they go to lay eggs.

People in that part of Cambodia started to call the large fish Boramy, or full moon, because of its large shape and the fact that the moon was visible when it was let go. The fisherman was paid $600 for his catch, the same price he would have gotten if he sold it in a market.

track –v. to follow the progress and movements of something

extinction – n. the state or situation that results when something has died out completely