Update Required To play the media you will need to either update your browser to a recent version or update your Flash plugin.
By Anne Ball
05 June, 2016


It might be hard to imagine, but scientists found a sponge the size of a minivan in deep waters near the Hawaiian Islands.

The scientists said this sponge is the largest one ever found by researchers. A U.S. government research ship called the Okeanos Explorer found the record-setting sponge last year. A report on the discovery was published recently in the journal Marine Biodiversity.

The ship was in the Pacific Ocean, off the Northwestern Hawaiian Islands, when the researchers first saw the sponge. They were surprised to find it about two kilometers below the water's surface. Because the sponge is so large, the researchers said it suggests that it is very, very old.

They captured pictures of the rare organism with video taken by an underwater vehicle, which was operated from the research ship. The sponge has a bluish-white color, and looks a little like a huge brain. 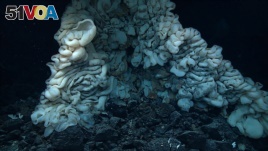 Sponge the Size of Minivan Found in Hawaiian Waters

Christopher Kelley is a biologist at the Hawaii Undersea Research Lab. He helped with the research project.

"Here's this animal that has presumably never been encountered before," he told The Maui News. "And it's enormous and that kind of brings up a little intrigue for deep water and what else exists down there."

The scientists said the sponge measured over 3.5 meters from one end to the other. They said it was from 1.5 to two meters wide. That would make it bigger than the largest sponge ever recorded.

Scientists do not know how long sponges can live. But some of the large ones found in shallow water are thought to be over 2,300 years old. Some estimates say they could be thousands of years older.

"The largest portion of our planet lies in deep waters, the vast majority of which has never been explored," said Daniel Wagner. He is the lead scientist for the project with NOAA's Office of National Marine Sanctuaries. NOAA is short for the National Oceanic and Atmospheric Administration.

Wagner said that finding such a large sponge shows "how much can be learned from studying deep and pristine environments," like the Papahānaumokuākea Marine National Monument in Hawaii.

Sponges are similar to coral reefs because they give other sea life a habitat or place to live. They also filter seawater. They remove unwanted material that other sea creatures do not eat.

The report said very large and old sponges provide "key ecosystem services such as filtering large amounts of seawater." According to the study, sponges also provide important homes for invertebrate and microbial species.

Sponges are actually sea creatures, but sometimes people think they are plants. A website called Shape of Life says ancient sponges were the first animals on Earth, showing up about 2.5 billion years ago.

Sponge the Size of Minivan Found in Hawaiian Waters

Sponges are simple organisms. They come in many different shapes and sizes. They connect to rocks or other solid structures and get their food through the seawater.

The Papahānaumokuākea Marine National Monument was founded in 2006. Its website says the monument area is the "largest contiguous fully protected conservation area under the U.S. flag, and one of the largest marine conservation areas in the world." It protects 362,073 square kilometers of land. That makes it bigger than every U.S. national park combined.

The Okeanos Explorer made another discovery last February when it spotted a "ghost-like" octopus believed to be a new species.

The octopus was found in water over 4,000 meters deep, off Hawaii's Neckler Island. Okeanos' remotely-operated vehicle, Deep Discoverer, spotted the creature on a flat rock.

According to NOAA, "the appearance of this animal was unlike any published records and was the deepest observation ever for this type of cephalopod."

This story was written by VOA News. Anne Ball adapted it for Learning English. George Grow was the editor.

presume - v. to think something is true without knowing it is true

intrigue - v. to make (someone) want to know more about something

pristine – adj. clean and fresh as if new

invertebrate – n. an animal without a backbone

microbial – adj. having to do with microbes—tiny living things that can only be seen with a microscope

cephalopod – n. a kind of sea animal mollusk such as an octopus or squid.