Update Required To play the media you will need to either update your browser to a recent version or update your Flash plugin.
By VOA
12 March, 2013

From VOA Learning English, this is EXPLORATIONS in Special English. I'm Christopher Cruise.

Laser technology has aided scientists with their knowledge of Stonehenge, the stone monument near the city of Salisbury, England. Most of the stones at Stonehenge stand in incomplete circles. One of the largest stones weighs about 40 thousand kilograms. Some stones are more than seven meters high. Others lie broken on the ground. 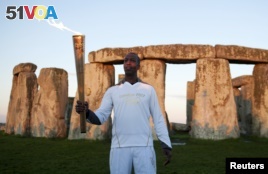 Stonehenge is still a place of ceremony. Last year, Michael Johnson was photographed with the Olympic torch at the stone circle before the London Olympic Games.
The mysterious stone formation has stood on the flat, windy Salisbury Plain for perhaps five thousand years. But the organization English Heritage used modern technology to solve some of that mystery.

Recently, researchers working for English Heritage reported what they found after directing lasers at some of the stones. The lasers showed bright gray-white surfaces under material collected on the stones over the ages. And the intense light seemingly identified an ancient secret.

The uncovered surfaces appear to have been cut and shaped with a clear purpose. The researchers say the designers of Stonehenge wanted to improve the ability to see sunlight through the circles twice each year.

The effect of the light passing through spaces between the stones has brought many people to the monument on those special days. Sometimes clouds cover the sun. But the people come anyway.

Researchers say Stonehenge's ancient "architects" placed importance on what people could see from northeast of the monument. It is thought that travelers came toward the stone circle in that direction on a path from the Avon River. The pathway is one of Stonehenge's two avenues.

The stones on the northeast side are the biggest and the most similar to each other on the monument. The southwestern part has smaller stones. The smaller ones are less alike and have not been improved like the others.

The placement of the stones raises many questions. For example, why did the builders of Stonehenge use and improve their best stones on that side? Did they think that was the most important part of the monument?

Tests with lasers also showed 71 images of axe heads. The images were carved into the stones. Researchers say the "artists" probably lived during the Early Bronze Age. That would have been about a thousand years after Neolithic people first worked on Stonehenge.

The lasers also showed graffiti and other damage done by 19th century visitors. At that time, people were permitted to remove pieces of the stones. They could pay workmen to break off pieces to take home as souvenirs.

For many years, some people believed that Stonehenge was used as an observatory for watching the skies or a place to worship the sun. Others thought the stone circles formed a calendar. But other theories are gaining support.

Researcher Mike Parker Pearson, for example, says Stonehenge was built to help unite what now is eastern and western Britain. These areas had suffered long years of conflict and battle.

Professor Parker Pearson is with the University of Sheffield. He leads a team called the Stonehenge Riverside Project. The project has been studying the stone circle and places linked to it for almost 10 years.

Professor Parker Pearson says the early people were developing a common culture. Changes in earthenware and ways of life showed that people were traveling. They were learning about cultures other than their own. But the professor's main idea about the purpose of Stonehenge is that it served as a burial ground.

Some human remains found near the stone circles show physical injury or disease. This helped lead two well-known researchers to propose that Stonehenge was a refuge or shelter for people with health problems.

Archeologists Geoffrey Wainwright and Timothy Darvill proposed that Stonehenge may have served as a place to heal the sick. Like Mike Parker Pearson, the two archeologists have worked for years to try to solve the mysteries of the circles.

The archeologists base their theory of Stonehenge's purpose partly on qualities of bluestones used at the monument. The stones are placed in a double circle with the entrance facing northeast. During the past century, the bluestones were shown to be from the Preseli Mountains in Wales. Their name comes from their color. Some people say the stones appear to be blue when they are wet or cut.

The archeologists note that some bluestones in modern Wales are still part of a healing tradition. In some places, people use water poured over the stones in an effort to cure sickness.

Archeologists Wainwright and Darvill made an important discovery at Stonehenge in 2008. They dug up about 100 pieces of organic material from where the first bluestones were placed. From this discovery, they say the bluestone circle was built about 4,300 years ago.

A number of theories have been proposed to explain how the heavy stones made their way to the Salisbury Plain. Some geologists have suggested that glaciers – huge ice formations – carried the stones. But hundreds of kilometers separate the mountains in Wales from the windy English plain.

Efforts to transport the heavy stones by boat on the river sank the boat. And attempts to row the stones across land showed that it would have taken months to move them a relatively short distance. Some experts, however, note that ancient people had lots of time and may have been more than willing to do the labor.

Another mystery is how people raised the stones to standing positions. Some weigh four tons.

One experiment used specially shaped stone balls. The balls were rolled on long pieces of wood. Each piece was cut like a rail or long bar. Professor Bruce Bradley of Exeter University reported that a demonstration using this method was successful. He said about 10 oxen could have moved as many as 10 stones a day up to 16 kilometers.

For many years, experts thought ancient people stopped using Stonehenge and the area around it perhaps 3,500 years ago. But in 2000, British scientists learned that people may have come to Stonehenge much later. They identified human remains as those of a man executed there, and used radiocarbon-dating to find the time of his death. The finding was made because of a rediscovery.

Partial skeletons, sets of bones, of many people were unearthed in the 1920s and 1930s. One skeleton was identified as that of a man who was killed near Stonehenge.

The man died when he was hit with the sharp metal edge of a sword that cut off his head. The experts say he was about 35 years old at the time of his death.

The skeleton was first discovered in 1923. A British military officer named William Hawley dug it up from inside Stonehenge's ancient circles. It was shown to the public and kept at the Royal College of Surgeons in London.

German bombs badly damaged the college during World War Two. Nineteen-thousand objects from its collection were taken to houses in the countryside for safe-keeping. They included the skeleton. After the war, it was returned to the medical school. But no one knew it was there. It was thought to have been destroyed in the bombing.

In 2000, archeologist and writer Mike Pitts was working in the National History Museum in London when he discovered the remains. Mr. Pitts has since described feeling an emotional moment in the presence of the earthly remains of a person who lived – and died – so long ago. Like the mysteries of Stonehenge, the full story of the executed man probably will remain secret.
Related Articles
go top