A top Obama administration official says the fight against terrorism has entered what he calls a new phase. Homeland Security Secretary Jeh Johnson spoke to ABC News on Sunday. He said groups like the self-declared Islamic State are successfully using social media to interest new members or to launch attacks in the United States.

Mr. Johnson says the terrorist threat has changed because of the successful use of social media by the Islamic State. He says the group has shown the ability to reach out and recruit members in the United States. 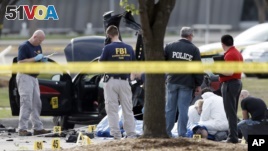 Police shot and killed two gunmen after they opened fire on a security officer outside Curtis Culwell Center in Garland, Texas, Monday, May 4, 2015. The center was hosting a contest for Prophet Muhammad cartoons. (AP Photo/Brandon Wade)

"Because of the use of the Internet, we could have little, or no, notice in advance of an independent actor (attacker) attempting to strike. And so that's why law enforcement at the local level needs to be ever more vigilant, and we're constantly reminding them to do that."

Mr. Johnson says federal, state and local law enforcement officials are cooperating more closely now than they were before the terrorist attacks of September 11, 2001.

Last week, the head of the Federal Bureau of Investigation warned there might be thousands of Islamic State followers online in the United States. FBI Director James Comey said it is not easy to know who among them is a threat.

Earlier this month, two gunmen attacked what has been called a ‘free speech' event in Garland, Texas. The event's organizers offered a $10,000 prize for the best cartoon of Islam's Prophet Mohammad. For Muslims, any image of the Prophet is considered disrespectful.

The gunmen were killed in an exchange of gunfire with police. Mr. Comey said the FBI had warned the Garland police to watch for the two men hours before the attack.

Secretary Johnson says federal officials are fighting social media recruitment efforts by talking to members of the Muslim community in the United States.

Mr. Johnson admits the Islamic State seems to be effective in its communications. He says Muslim communities must help federal, state and local officials fight the recruiting efforts.

"It has to come from Islamic leaders who, frankly, can talk the language better than the federal government can and so, when I meet with community leaders, Islamic leaders, it's one of the things we urge them to do. Some have begun it. We've seen some good progress, but there's a lot more than can be done."

Mr. Johnson supported the decision by U.S. military officials to increase security at bases across the country. The FBI had warned that Islamist militants could attack troops or local police.

Michael McCaul is the chairman of the House Homeland Security Committee. He told Fox News on Sunday there had been an increase in threats against local police and military bases in the US.

"We're seeing these on an almost daily basis. It's very concerning. I'm over here with the French counter-terrorism experts on the Charlie Hebdo case (trying to learn) how we can stop foreign fighters coming out of Iraq and Syria to Europe. But then, we have this phenomenon in the United States where they (terrorists) can be activated by the Internet. And, really, terrorism has gone viral."

Representative McCaul says the possible threat from terrorism is worse than the FBI has said it is. He says the United States faces two threats: one from fighters leaving the Middle East, and the other from thousands across the country who will attack when the Islamic State sends a message on the Internet. He warns that threats from the terrorists will increase because of the many failed states in the Middle East and North Africa.

Victor Beattie reported this story from Washington. Christopher Jones-Cruise adapted it for Learning English. George Grow was the editor.

phase – n. period; a step in a process

recruit – v. to persuade someone to join you; getting people to join an organization; to add members to a group

vigilant – adj. to be watchful or on guard

cartoon – n. a picture or image said to make fun of someone

engagement(s) – n. an event or meeting

counter(ing) – v. do(ing) something in answer to, or in defense of, something else

What are officials in your country doing to fight terrorists? We want to hear from you. Write your thoughts in the comments section.