Lawsuit Claims US Colleges Working Together to Limit Financial Aid

Update Required To play the media you will need to either update your browser to a recent version or update your Flash plugin.
By Dan Friedell
15 January 2022

Some of the most competitive universities in the United States are facing a lawsuit, accused of violating an important business law.

Sixteen schools, including Yale University, Notre Dame University, Georgetown University, and Columbia University are accused of working together to hold back financial aid from students.

The lawsuit centers on universities that are part of the 568 Presidents Group. That is a group of colleges that were permitted to work together to keep common financial aid rules. 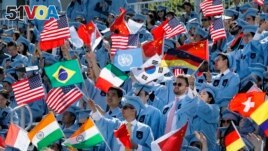 FILE - Columbia University students celebrate at the graduation ceremonies in 2019. A recent lawsuit claims Columbia and 15 others have worked together to limit financial aid to students. (AP Photo/Mark Lennihan)

The lawsuit, however, calls the schools a "cartel." A cartel has a negative meaning. It is used to describe an illegal group that works together to make more money. Criminal organizations like drug gangs are often called cartels.

Lawyers for five students filed the lawsuit on January 9. The students represent a group of 170,000 who, the lawsuit claims, paid too much for college since 2003.

The lawsuit addresses two issues. The first is that the schools unfairly worked together to decide how much money would be offered to needy students.

The second is that the schools did not always choose the best students. The schools chose students for reasons such as their ability to pay the full price of college.

Universities will often accept the best students and then make a list of second-place students that may be accepted later. The decisions made about students on that list may be an important part of the lawsuit.

Danielle Douglas-Gabriel writes about higher education for The Washington Post. She said the universities that chose students based on their ability to pay may have broken what is known as anti-trust law.

"This lawsuit is saying ‘well, if these schools are engaging wealthy students in the ways in which we are showing you they are, then they're not need-blind and therefore they are violating this statute and therefore violating anti-trust laws.'"

Anti-trust laws are regulations that support competition in the marketplace. The laws do not permit companies, or universities in this case, to agree to sell goods at the same price.

The students who filed the case say the universities worked together to "eliminate price competition."

The U.S. government allowed the 568 Presidents Group to work together to create systems to award money to students in need. In return, the universities agreed to accept students without first looking at their ability to pay. The lawsuit claims the universities violated this agreement.

The lawyers also claim that some universities limited the amount of money given to needy students by keeping places open for the children of wealthy donors or graduates who could pay the full cost. The universities saved hundreds of millions of dollars.

The lawsuit represents both students and parents who paid tuition.

Spokespeople from several universities said their schools plan to defend themselves. They are following the law, they say.

International students cannot receive financial aid from the U.S. government, but some do receive money from the universities who want to have a diverse student group.

The lawsuit asks for a jury trial, a breakup of the 568 group, and that schools return money to students who were affected by the actions of the universities.

Peter McDonough is Vice President at the American Council of Education. It is a group that works with 2,000 colleges and universities in the U.S. In a conversation with The New York Times, he said he does not think the schools will turn out to be in violation of the laws. He said he would be surprised to "find that there's fire where this smoke is being sent up today."

Douglas-Gabriel said she thinks the schools will work hard to get the courts to throw out the lawsuit. Its accusations could be very damaging.

Harvard University is not named in the lawsuit because it is not a member of the 568 Presidents Group. Harvard did not join the group when it formed because the school said it wanted to make more money available to students.

Dan Friedell wrote this story for Learning English with additional reporting from Reuters.

Do you think students will get some money back from their colleges? Tell us in the Comments Section and visit 51VOA.COM.

Start the Quiz to find out

lawsuit– n. a process by which a court of law makes a decision to end a disagreement between people or organizations

engage –v. to give serious attention to someone or something

statute – n. a written law that is formally created by a government