Update Required To play the media you will need to either update your browser to a recent version or update your Flash plugin.
By John Russell
01 December, 2016


Protests over the English language in Cameroon have grown violent.

A strike, called to increase the use of English, has spread to schools and universities in English-speaking areas.

Lawyers and teachers, supported by young people, refused to call off the strike as protesters clashed with members of the military. 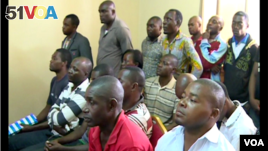 The governor of Cameroon's North-West Region says at least one person has been killed in the clashes. "Investigations are ongoing to establish the responsibilities," said governor Adolphe Lele L'Afrique Deben Tchoffo.

But media reports suggest that as many as four people were killed.

The protesters are demanding greater rights for English speakers in a country that has both English and French as official languages.

The roots of the strike

The current strike has created more debate – and caused more concern – among government officials and local rulers than any other issue in recent years.

The roots of this strike go deep.

English speakers make up about 20 percent of Cameroon's population. The constitution says that English and French – languages that come from the colonial period – should be equally important. However, many official documents are written only in French. Some government ministers give speeches in French, even in English-speaking areas.

No English speaker has held an important position, such as minister of defense, finance, or territorial administration, in Cameroon's nearly 60-year history as an independent country.

Lawyers and the Government

Lawyers have been at the front of the strike. Harmony Bogda, spokesperson for the striking lawyers, says that after discussions lasting 72 hours, lawyers left with the idea that the government does not want to listen to them. As such, Bogda says, the strike will continue.

Ben Muna is a lawyer and a member of the Cameroon Bar Council Association. He says his colleagues are angry because security forces increased tensions and beat them for demonstrating peacefully.

Communication minister and government spokesperson Issa Tchiroma says the government is unable to approve some of the requests. He says the lawyers are responsible for the recent violence in English-speaking areas.

"Those who are responsible for such abuses must know that nowhere in the world, disorder has ever led to anything constructive. We therefore call on all our compatriots to show proof of reserve, self-control, high sense of responsibility and citizenship in a spirit of dialogue."

Schools have remained closed since the clashes started last Monday.

colleague – n. a person who works with you

region – n. an area or territory

spokesperson – n. a man or women who claims to represent and speak for others