Update Required To play the media you will need to either update your browser to a recent version or update your Flash plugin.
By Bruce Alpert
04 April, 2016

It is being called "the biggest global corruption scandal in history."

The leaders, including Russian President Vladimir Putin as well as his friends, moved $2 billion through secret accounts.

The documents were leaked to journalists. A group of journalists, called a consortium, reviewed the documents. The group is called the International Consortium of Investigative Journalists. 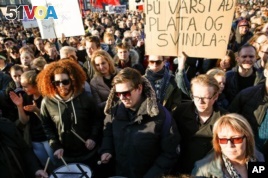 The documents show the secret financial dealings of the wealthy and powerful.

People often open up offshore accounts to avoid taxes and giving information to the public about their financial holdings, the consortium said. Some of the accounts were used by wealthy men to hide money in divorce cases.

Most of the world leaders named in the reports denied wrongdoing. But there were immediate calls for investigations.

In Iceland, some members of Parliament Monday demanded a vote of no confidence for the prime minister. The Associated Press said the account was opened for Gunnlaugsson in 2013 when Iceland was going through a major financial crisis.

Here is how the information came out:

Tax records for more than 200,000 companies and 14,000 clients from a law firm in Panama were obtained by an unnamed person. That person offered the documents to a German newspaper. The person did not ask for money, but asked for unspecified security procedures.

The documents were reportedly hacked from the Panamanian law firm, Mossack Fonseca.

The firm specializes in creating offshore accounts. It denied wrongdoing.

The impact of the disclosures has been dramatic.

Russian television Monday did not cover the news about offshore accounts of people linked to Putin. One of Putin's friends identified from the leaked documents is Sergei Rodulgin. He is a well-known cellist.

Putin's spokesman is Dmitry Peskov. He said the "lack of details" made it impossible to respond. Last week, he predicted an "information attack" on Putin. He said the leaks are timed for September's Russian Parliament elections.

The International Consortium of Investigative Journalists reported on the divorce proceedings of Dmitry Rybolovlev and his wife, Elena. Elena Rybolovlev said her husband, a Russian mining executive, had hidden money.

The consortium said the leaked documents show Rybolovlev had purchased a New York City penthouse for $88 million and art work for $630 million. The artwork was obtained with the help of Mossack Fonseca, the consortium said.

Among those found to have offshore accounts were former top government leaders of Georgia, Iraq, Jordan, Qatar, Sudan, Abu Dhabi, and Ukraine.

In India, the Associated Press said 500 people were connected to offshore accounts. They include Indian superstars Aishwarya Rai Bachchan and Amitabh Bachchan.

In France, President Francois Hollande said the leaked documents are "good news" because it will help the government recover money hidden in offshore accounts.

In Norway, the DNB Bank apologized for helping about 40 customers open offshore companies. "That it was legal to set up this type of companies doesn't mean that it was correct for us to do it for these customers," the bank said.

The Czech Center for Investigative Journalism said it found 283 Czech citizens with off-shore companies. That includes Petr Kellner, the wealthiest businessman in the Czech Republic.

And in Australia, officials said they are investigating more than 800 wealthy residents for possible tax evasion related to off-shore accounts.

Ken Bredemeier reported on this story for VOANews. Bruce Alpert adapted his report for Learning English. Kathleen Struck was the editor.

journalist – n. the activity or job of collecting, writing, and editing news stories for newspapers, magazines, television, or radio

divorce – n. ending a marriage by a legal process

hacked – v. to secretly get access to the files on a computer or network in order to get information, cause damage

impact – n. to have a strong effect

disclosure – n. the act of making something known

respond – v. to say or write something as an answer to a question or request

penthouse – n. an apartment on the top floor or roof of a building

obtain – v. to gain or get something

specify – v. to be specific about something

procedure – n. a series of actions that are done in a certain way or order

specialize – v. to limit your business or area of study to one specific subject

superstar – n. an extremely famous and successful performer or athlete

resident – n. a person who lives in a community

evasion – n. the act of avoiding something that you do not want to do or deal with