Learn How to 'Catch Lightning in a Bottle'

Update Required To play the media you will need to either update your browser to a recent version or update your Flash plugin.
By Anna Matteo
11 August, 2018


Now, Words and Their Stories, a weekly program from VOA Learning English.

On this show, we explore common phrases and expressions in American English.

Today we talk about a saying that comes from nature -- the weather, to be exact. 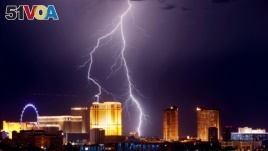 Lightning is a powerful force of nature. In fact, a lightning strike carries millions of volts of electricity.

Scientists say a bolt of lightning strikes somewhere on Earth every second. That is a lot of energy!

Think how wonderful it would be if we could capture lightning and sell it in a bottle. Sadly, that is not something you or I can do, at least not yet.

The phrase "to catch lighting in a bottle" means to capture something powerful or difficult. Then you are able to control it and perhaps show it to the world. This is where the "bottle" part is important.

So, something elusive is difficult to define or to identify. "Fleeting" means to be here one minute and gone the next. Something fleeting is hard to hold onto. It is hard to catch or even define. It's as if it's too special.

For example, once I worked on a theater project and the experience was like lightning in a bottle. The performers -- all gifted and friendly -- became like family. We spent every day together. The material we performed was funny, yet difficult. And every night the people who gathered to watch us perform were wonderful. Experiences like that do not come along every day.

So, we often use the term "lightning in a bottle" when talking about something creative. But not always.

Sometimes we use this expression to describe something that it is difficult to do and use it as a simile. A simile compares two things and begins with the word "like" or "as." For example, getting all the scientists to agree on a subject for the conference was like trying to catch lightning in a bottle. They all wanted to talk about different issues.

As you may have noticed, we either use the verbs "capture" or "catch" for this expression. "Catch" is less official sounding.

Language experts do not know exactly where this expression comes from. Some say it may have started with Benjamin Franklin -- the American diplomat, businessman and inventor.

Ben Franklin is known for a scientific experiment involving electricity and lightning. As the story goes, Franklin once flew a kite in a lightning storm. He had hoped that lightning would strike the kite as it flew high in the sky. He thought the electricity would travel down the string to a metal key at the bottom. Then the plan was to catch the electricity in a glass jar.

But that didn't happen. However, it did lead to the invention of the lightning rod and the understanding of positive and negative charges.

We'll end the show with a final usage of this expression. It is not that common but probably worth noting. "Bottled lightning" can also mean a very strong alcoholic drink.

"You're the brightest light I've ever seen,

Break the glass and set yourself free,

Do you know of a time when someone was able to capture lightning in a bottle? Using the language you heard here, tell about it in the Comments Section!

Anna Matteo wrote this story for VOA Learning English. George Grow was the editor. The song at the end is Eli Lieb singing "Lightning in a Bottle."

volt – n. a unit for measuring the force that moves an electric current

brilliant – adj. very impressive or successful : brilliance – n. the quality or state of being brilliant

rare – adj. not common or usual : not often done, seen, or happening

kite – n. a toy that is made of a light frame covered with cloth, paper, or plastic and that is flown in the air at the end of a long string

jar – n. a glass container that has a wide opening and usually a lid