Update Required To play the media you will need to either update your browser to a recent version or update your Flash plugin.
By Faith Pirlo
06 May 2022


Hello! This week on Ask a Teacher, we will continue to answer Erol's question about learning new words by using suffixes to create adjectives and adverbs. 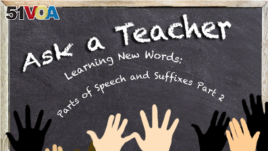 My name is Erol. What is the best way of learning words? I am very confused about this subject. Can you give me some advice about learning words, please?

Last week we looked at creating nouns and verbs by adding suffixes to words. Now, we will create adjectives and adverbs with suffixes.

Reviewing parts of speech and suffixes

Words that add meaning to a sentence are known as content words. Content words often appear as one of the four major parts of speech: nouns, verbs, adjectives and adverbs.

Let us look at an example with all four major parts of speech:

The adjective, "orange" describes the color of the cat which is the noun. Loudly is the adverb that describes the verb "cry" in the past tense.

We add suffixes to the end of the base form of a word to change the part of speech. This way we can create several words from the base form in English.

To change some nouns into adjectives we can use several endings: -ful, -less, -y, -al, -ic, and -ical.

The suffix -ful means having the quality of the noun.

The suffix -less means "without."

The suffix -y means to be characterized by.

This suffix means "relating to."

Remove the -y and add the suffix -ic.

This word means important or famous in history.

Remove the -y and add the suffix.

This word means relating to history or past events.

Let us move on to making adjectives from verbs!

To turn some verbs into adjectives, we can use the suffixes -ive, -ious, -ing, -ed/-en and -able.

Drop the -e and add the suffix.

Drop the -y and add the suffix.

Sometimes participles are used as adjectives. These adjectives can have a sense of either continuation (-ing) or completion (-en or -ed).

Keep the -y and add the suffix.

An example sentence is:

The crying baby did not sleep all night.

An example of this suffix is:

Lastly, for making adjectives from verbs, we have the suffix -able. It means able or possible to do.

This word means able to be broken.

Finally, many adjectives become adverbs by adding the suffix -ly.

Now let us complete the chart from last week that lists possible words you can make by adding suffixes:

Understanding suffixes can be a path to quickly learning a lot of new content words.

suffix –n. a letter or group of letters added to the end of a word to change its meaning

chart –n. a form of presenting information using a table or columns to group things