Lebanese Women Make Peace One Meal at a Time

Update Required To play the media you will need to either update your browser to a recent version or update your Flash plugin.
By Anna Matteo
28 January, 2015


When you hear the words "peace talks," what do you imagine? Perhaps you think of heads-of-state, diplomats or other high government officials sitting in large chairs in an official-looking room.

But what if the peace talks looked like this -- all the government officials stayed at home and instead sent their mothers and grandmothers. These women could meet in a kitchen around a kitchen table. While the women prepare food together, they could talk about how to solve the problems between their families – a kind of "Mother Knows Best" diplomacy, you might say.

In a way, that is what is happening in Tripoli, Lebanon's second largest city. Years of fighting there have split some neighborhoods. 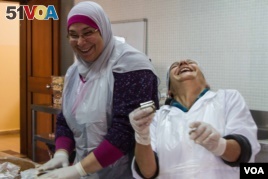 These Lebanese women are from two religious communities (the Bab Al-Tebbeneh and Jabal Mohsen) and should be enemies. But don't tell them that. They are too busy making money for their families, peace for their communities and just having fun together, December 2014. (J. Owens / VOA)

The Syrian war and the actions of Syrian President Bashar al-Assad have made tensions worse. Long-running tensions in Tripoli led to new clashes in October 2014. Fighting between gunmen and the Lebanese Army caused thousands of people to flee their homes. The involvement of Islamist militants in the fighting increased fears that the self-declared Islamic State was attempting to gain support in Lebanon.

One street in Tripoli is on the front line of this conflict. This street divides a neighborhood along sectarian or religious lines.

But between these two fighting groups is a kitchen.

This kitchen is a place where women from both sides work together to earn a living. These women bring hope that years of hatred can be put aside in the name of good food.

Women from the opposing sides are coming together to cook – thanks to a non-profit called Ruwwad al Tanmeya-Lebanon. Experienced chefs helped the women complete training. Now they are earning a living by selling their food to organizations such as the Red Cross.

Sarah Al-Charif heads the organization. She says the aim is not just to unite the women, but to empower them, too.

"In this project they realize that now we are sharing the same pain but now we are sharing the same purpose. So we started to share the same purpose which is we want to get income ... to generate income in order for us to support our families financially. And when you give them the access to start empowering themselves financially, then you are empowering indirectly their families' education."

"Each person was sitting by herself. We were looking at each other, thinking: 'She's from there, and I'm from here.' Then, after the second or third sessions, we tried to get closer. We tried to get more involved. And I really tried to get into it. Now when we meet, we close the door so people outside don't hear how happy we are."

Another woman in the program, Wafaa Hazzouri, agrees with Ms. Awad.

"We've now been with each other for eight months. We feel like we are one family. If one of us is absent, we all ask about her, why didn't she come? We have a really intimate environment now."

Plans for the kitchen to serve the public have been delayed because of the clashes. But the conflict has not stopped people from ordering food ... and lots of it.

Orders continue to flood in. These women will continue cooking together and breaking down the barriers of hatred with each meal they make and sell.

What do you think of "food diplomacy"? Share your thoughts in the comments section.

This report was based on a story from reporter John Owens in Tripoli. Anna Matteo wrote it for VOA Learning English. George Grow was the editor.

sectarian – adj. relating to religious or political groups and the differences between them

barrier – n. something that makes it difficult for people to understand each other