Update Required To play the media you will need to either update your browser to a recent version or update your Flash plugin.
By Jim Dresbach
16 September, 2016


Ethiopian runner Feyisa Lelisa is urging the United States Congress to take action in support of Ethiopians protesting against their government.

Lelisa won the silver medal in the marathon at the Olympic Games in Rio de Janeiro last month. He spoke to reporters earlier this week during a visit to Washington, D.C.

He said that the Ethiopian people are "peace-loving, but they have been denied peace for a very long time." The protesters "are calling for the freedom, (and) democracy that you have here." He called on the U.S. government to urge the Ethiopian government to make sure that democracy prevails in Ethiopia.

Feyisa Lelisa gained attention throughout the world during the men's marathon at the Rio Games. He crossed his wrists as a sign of protest at the end of the race, near the finish line.

Lelisa is Oromo and made the sign in support of Oromo protests. Those protests have been taking place in Ethiopia since last November. The demonstrators are raising issues such as land rights and representation in the government.

Since Lelisa crossed his wrists at the race in Rio, other runners have copied this move.

Ebisa Ejigu crossed his arms in the Quebec City Marathon in Canada. Tamiru Demisse is a member of the Ethiopian team at the Paralympics in Rio. He crossed his arms as he won a silver medal in the men's 1,500 meter race for runners with poor or limited eyesight. 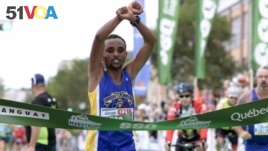 The resolution also calls on the government to investigate the killings and violence during protests in the Oromia and Amhara areas of Ethiopia.

Lelisa is visiting the United States on a temporary visa. He said he was not seeking asylum.

Salem Solomon wrote this story for VOANews. Jim Dresbach adapted it for Learning English. George Grow was the editor.

medal – n. a piece of metal often in the form of a coin with designs and words in honor of a special event, a person or an achievement

marathon – n. a running race that is about 42 kilometers long

paralympic – n. a series of international contests for athletes with disabilities

prevails – v. to defeat an opponent, especially in a long conflict or competition