Update Required To play the media you will need to either update your browser to a recent version or update your Flash plugin.
By Caty Weaver
29 April, 2016


Beyonce opened her Formation World Tour to a full house on April 27 in Miami, Florida.

The pop superstar started the show with songs from her album "Lemonade,'' released just a few days earlier. The album release also came with a special television program starring Beyonce on the cable station HBO.

Much of "Lemonade" appears to be tied to Beyonce's life. Lyrics like, "Are you cheating on me?'' raised questions of whether her famous husband, Jay Z, had been involved with another woman.

Beyonce came onto the stage wearing black leather and a big country-western hat. Her performance included huge red lights and fireworks. Images of an electrical storm played on a screen behind her during one emotional song.

During the concert, Beyonce did not talk about her husband except for a quick "thank you" at the end. She also said little about her new album, except that her favorite song from it is "All Night.'' It begins with the line, "I've found the truth beneath your lies.''

She also did a quick cover of the Eurythmics' "Sweet Dreams.'' And she sang her song "Halo" in memory of the pop star Prince, who died last week. 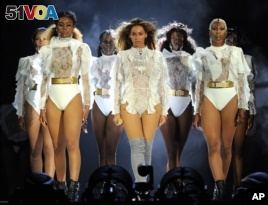 Beyonce performs during the Formation World Tour at Marlins Park on April 27, 2016, in Miami, Florida.

She thanked him for his "beautiful music" and told the crowd, "He's an artist that inspired all of us.''

Later, images of Jay Z holding the couple's newborn child played as she sang. Wednesday's show also included a video from Jay Z's grandmother on her 90th birthday. In the video, she said she turned life's lemons into lemonade.

Beyonce's album is expected to sell hundreds of thousands of copies in its first week. Billboard magazine says it is likely headed to the number-one place on its weekly Top 200 list of album sales.

Both Beyonce and her husband have appeared in photographs this week in which they are not wearing their wedding rings. But it is not clear if that means anything. Beyonce's messages have seemed somewhat mixed. She did thank Jay Z with a song at the concert, saying "I want to dedicate this song to my beautiful husband. I love you so much."

Of course, "Lemonade" can be both sweet and sour.

Caty Weaver adapted this story from an Associated Press article, with additional reporting. Ashley Thompson was the editor.

cover - n. a recording or performance of a song that was previously recorded by someone else