Update Required To play the media you will need to either update your browser to a recent version or update your Flash plugin.
By VOA
04 May, 2016


Hundreds of things belonging to rock ‘n' roll musicians will be offered to the public at an auction later this month.

Julien's Auctions is holding the event on May 21 at Hard Rock Café in New York City. The company is based in California and specializes in selling objects from or related to the entertainment industry. 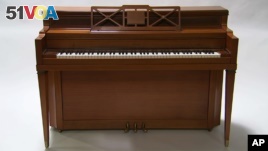 This April 5, 2016 image taken from video shows a piano owned by singer Lady Gaga in Culver City, Calif. Julien's Auctions is offering the instrument in its "Music Icons" memorabilia sale at the Hard Rock Cafe New York on May 21. (AP Photo/Rick Taber)

Also available for sale is a note from Kurt Cobain, former frontman of the rock group Nirvana. In it, he discussed the possibility of the band breaking up.

Cobain expressed anger about a magazine report about him and his wife, rocker Courtney Love. The 1992 Vanity Fair story said that the two were using drugs during Love's pregnancy.

"I love my wife and soon to be new daughter too much to let everyones low opinions of us ruin our lives together," he wrote.

Cobain killed himself in 1994 and Nirvana broke up. Many people still mourn the musician more than 20 years later. His letter is expected to sell for between $20,000 and $30,000.

There will be many other objects related to rock stars available at the auction. These include clothes, guitars and mail to and from their fans.

Lennon's handwritten lyrics and notes are for the song "Being for the Benefit of Mr. Kite!" It was part of the Beatles' 1967 record album "Sgt. Pepper's Lonely Hearts Club Band." Some observers expected the Lennon writings to sell for between $300,000 and $500,000.

Martin Nolan of Julien's Auction said anything written by Lennon is highly sought by collectors.

Lady Gaga's first piano is also expected to sell for a huge amount. Part of the money is to go to the singer's Born This Way Foundation.

Julien's Auctions also expects to make a nice profit on a red and white "Rock Soldier" jacket. Freddie Mercury, the lead singer of Queen, wore it during the band's 1986 tour.

Nolan called the jacket "a great conversation piece." He added that, "Investors see these items as cool, but also really great opportunities to increase your investment because over time, chances are they will appreciate in value," he said.

The Reuters news service reported this story. Caty Weaver adapted it for VOA Learning English. George Grow was the editor.

If you could have any piece of rock 'n' roll history, what would it be? Let us know, and practice your English writing skills in the Comment Section. Or leave a message on 51VOA.COM.

lyrics – n. words of a song

conversation – n. an informal talk involving two people or a small group of people :the act of talking in an informal way

cool – adj. very fashionable, stylish, or appealing in a way that is generally approved of especially by young peopl

appreciate – v. to increase in value