Update Required To play the media you will need to either update your browser to a recent version or update your Flash plugin.
By Anna Matteo
27 October, 2018

Food expressions are popular with language learners. They combine two things important to every culture: food and language.

Today we are going to talk about spuds, a nickname for potatoes!

First of all, potatoes have been around for a very long time. In the food magazine Bon Appetit, Sam Dean writes about the beginnings of the potato. He explains that the common white potato came from Peru at least 7,000 years ago. Potatoes fed the Incan empire and other cultures in Peru at that time. 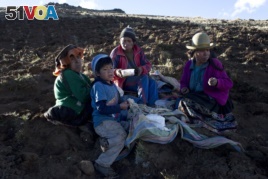 The Pacco family eats dinner after harvesting potatoes in Paru Paru, in the Cusco region of Peru, May 26, 2016.

These days, most countries use a type of potato in their cooking.

Whether you like them boiled, baked, mashed or fried – potatoes are what we call a staple. This means they are a basic food that you can build on. You can cover them in gravy, butter, salt and pepper or sour cream and herbs.

And for people who eat pork, you have not lived until you have eaten a baked potato topped with melted cheese and crispy bacon. Mm-mm. Yum!

Speaking of meat on top of potatoes, let's go back to the idea of potatoes being a simple, basic food.

We have a potato expression to describe a person like that: simple, basic, common. If someone is a meat-and-potatoes kind of person, they prefer eating simple meals such as – well, meat and potatoes. They are not interested in complex, fancy food. They are unpretentious.

Men are often described by this expression. When I hear about a meat-and-potatoes man, I picture a big, beefy guy. He likes to wear blue jeans and a simple t-shirt. He probably drives a truck and can fix it himself. He is a simple, no-nonsense kind of guy.

I like my steak well done, my taters (potatoes) fried
Football games on Monday night
It's just who I am
A meat and potato man

It is a little less common, but we can also describe a woman as a meat-and-potatoes kind of person. This type of woman not only likes to eat steak and hamburgers, she is also a down-to-earth person. She likes simple things, can take care of herself and is comfortable just hanging out with the guys.

Besides describing people, there is another way we use meat-and-potatoes. It can also describe the most important part of an activity or event.

In another example, you could say that voter outreach is the meat-and-potatoes of any political campaign. If people don't come out to vote for your candidate or issue, the rest of your campaign strategy really does not matter.

Okay, as you know, potatoes hold heat well, meaning they stay hot for a long time. This idea led to the "hot potato" party game.

Here's how you play. Players form a circle and toss a small object quickly to each other while music plays. You want to release the object as fast as possible, as if it was a hot potato. When the music stops, the player holding the potato must leave the game.

However, "hot potato" is more than a game. It can also mean a divisive or difficult issue. So, you could say the lawmakers discussed a few hot potato issues at the meeting.

And if an issue is too controversial, it might be a good idea to "drop it like a hot potato." When you drop something or someone like a hot potato, you leave the person or thing completely and quickly.

Take my friend Olga, for example. She was dating this guy for a few months and she really liked him. But when she saw him acting unkind to a little puppy, she dropped him like a hot potato! You see, Olga loves animals, especially dogs.

Hot potatoes might be important issues but "small potatoes" are just the opposite. They are unimportant matters. We often use the term small potatoes when we dismiss something. It is simply not worth our time.

Again, my friend Olga can help explain. After a storm damaged her hometown, she decided to collect money for homeless animals. She had little time to do so. There were so many cats and dogs without any food or shelter.

To help, I suggested selling lemonade to raise some money.

"Small potatoes!" she cried. "We need to go for big business donors. They have real money to spend!"

People can also be called "small potatoes." It is a way of saying they are not a threat. If police in a big city do not have enough resources, they probably won't waste manpower on small potatoes, like bicycle thieves. They have bigger fish to fry.

But please note. We may say "small potatoes" for trivial, unimportant matters.

But, we do not say "big potatoes" for important ones. English is funny that way!

Anna Matteo wrote this story for VOA Learning English. Caty Weaver was the editor. Earlier in the program, Alan Jackson sings "Meat and Potato Man." The song at the end of the program is the theme song to the children's show "Small Potatoes."

nickname – n. a usually descriptive name given instead of or in addition to the one belonging to a person, place, or thing

empire – n. a group of territories or peoples under one ruler

staple – n. the chief part of something : "Potatoes are the staple of their diet."

unpretentious – adj. not having or showing the unpleasant quality of people who want to be regarded as more impressive, successful, or important than they really are

trivial – adj. of little worth or importance