Let's Talk About Our Shadow

Update Required To play the media you will need to either update your browser to a recent version or update your Flash plugin.
By Anna Matteo
13 November 2021

What follows you all day long, but when the night or rain comes, it is gone? 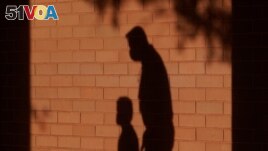 The shadow of an adult and a child is cast on the wall as they walk to a classroom in Davie, Florida, October 9, 2020. (AP File Photo)

If you said your shadow, you are right!

This dark, flat image of yourself can seem huge and threatening, although you know it holds no power. But that image helps to explain this saying: someone is afraid of their own shadow.

Hey, can you help me with something? I need to plant some flowers at a grave, but I need to do it tonight.

That's a strange request and usually I say "yes" to those. But I'm busy tonight. What don't you ask Beth?

Beth? Are you serious?

Beth is afraid of her own shadow! There is no way she is going to help me plant flowers at night in a cemetery.

Good point. Okay, I can move some things around and help. What time should I meet you at the cemetery?

Midnight? At the cemetery? Now I'm feeling afraid of my own shadow.

In English, a shadow can also be considered a weak form of ourselves. So, when someone is a weaker version of what they used to be, we can say they are a "shadow of their former self."

On the other hand, a person who is "larger than life" casts a big shadow. In this case, the shadow is not from their actual bodies but from their personality and successes. To "cast" in this case means to send something out or forward.

Children of very successful people often have problems. They "live in the shadow" of their parents and can feel not successful by comparison. We could also say that the successes of the parents "cast a shadow" over the lives of the children.

Something else that can cast a shadow is our sins – actions considered to be bad. Here is another expression "old sins cast long shadows."

Think about your shadow on a sunny day. The shadow you cast can be long and far-reaching. The same can be said for our past mistakes and sins. They can reach far into the future. They affect our present-day situation.

So, the saying "old sins cast long shadows" means that the wrong things we do early in our lives can have long-term effects.

I like to read mysteries. And often, the sins of one person comes back to cause them great problems. In one mystery, a jewel thief double-crossed her partner. She kept the jewels they stole together for herself. She changed her name and moved to a quiet English village. She thought she had gotten away with it. But her partner in crime found her ... and eventually so did the police. In the end, they were both arrested. When the police came to take the jewel thief away, she said, "How did you find me? My crime was so long ago." The detective answered, "Old sins cast long shadows."

"Old sins cast long shadows" also can be used in another way. It can be used to talk about other people's sins and how they affect us. It means that sometimes people suffer from the sins of others.

As far as usage, please note that the verb "cast" is often used with shadow and shadow expressions.

And that's all the time we have for this Words and Their Stories. Until next time ... I'm Bryan Lynn.

Anna Matteo wrote this for VOA Learning English. Susan Shand and Ashley Thompson were the editors.

riddle –n. a puzzling question to be solved or answered by guessing

shadow –n. a dark shape that appears on a surface when someone or something moves between the surface and a source of light

former –adj. coming before in time

cast –v. to send or direct (something) in the direction of someone or something

sin –n. an action that is or is felt to be bad

double-crossed –v. an act of betraying or cheating an associate

detective –n. a police officer whose job is to find information about crimes that have occurred and to catch criminals