Update Required To play the media you will need to either update your browser to a recent version or update your Flash plugin.
By Jill Moss
24 January, 2015


Now, the VOA Special English program, Words and Their Stories.

There are many special terms in the world of business.

The following story is about a sweetheart deal which I made last week. I made the deal with a friend, and we both made a profit. 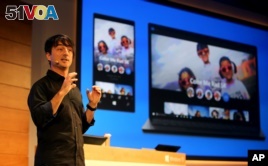 Joe Belfiore, Microsoft corporate vice president, Operating Systems Group, showcases the new Photos app for Windows 10, Jan. 21, 2015. Microsoft was not a "big gun" in its early days. It "got a break" when IBM selected its operating system for personal computers and grew into a "blue chip" company. (Ron Wurzer/AP Images for Microsoft)

I had started a small company several years ago. I worked hard to make it successful. It was a sign-making business. It was a small ccompay, not a blue chip company. It was not known nationally for the quality of its signs. It did not make millions of dollars in profits. And it was private. It was not a public company with shares traded on the stock market.