Update Required To play the media you will need to either update your browser to a recent version or update your Flash plugin.
By Dan Novak
04 April 2022


As the Muslim holy month of Ramadan begins, a group of volunteers in Libya work long hours to repair old or damaged copies of the Quran. The Quran is Islam's most important holy book.

Khaled al-Drebi is one of Libya's best-known Quran restorers. He is among the artisans who arrive at a workshop in Tripoli every day to meet the rising demand for Qurans during Ramadan.

For Muslims, Ramadan is a month of spirituality. There are daily sunrise-to-sundown fasts, along with prayer and acts of kindness. The month also means an increase in the sales of Qurans. 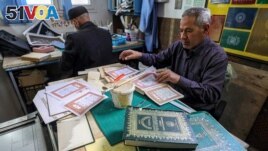 Libyan restorer of the Holy Koran Khaled al-Drebi (R), assembles pages together to be glued into a volume during a workshop on the restoration of copies of Islam's holy book, in Libya's capital Tripoli on March 22, 2022. (Photo by Mahmud Turkia / AFP)

"The purchase of new Qurans traditionally increases before the month of Ramadan, but this has recently changed in Libya," Drebi told the French News Agency (AFP).

For many people, it has been harder to buy Qurans. There has been an increase in the cost of Qurans, especially "since the state stopped printing" them in Libya, Drebi said.

The North African nation has been through 11 years of conflict. The government is weak and the country's economy, which depends on oil exports, is in poor condition.

A new Quran can cost more than $20. Drebi's workshop charges just a few dollars to restore one.

But cost is not the only important thing. For many people, the older Qurans also have sentimental value.

"There is a spiritual connection for some" people, Drebi said. He added that many choose to save Qurans passed on from relatives. "Some say this Quran has the smell of my grandfather or parents."

Abdel Razzaq al-Aroussi works on going through thousands of Qurans based on their level of damage.

"The restoration of Qurans with limited damage takes no more than an hour, but for those that are very damaged, they could require two or more hours," Aroussi said.

They "must be undone, restored and then bound," he said. It is a difficult process that requires a lot of "time and concentration."

Mabrouk al-Amin is also involved with the workshop. He said the restoration process "requires a good number of artisans."

"Working with the book of God is very enjoyable and we don't get bored...there is an indescribable joy in this work," he said.

Restorers say they have repaired half a million Qurans since the workshop opened in 2008. More than 1,500 trainees have graduated from 150 restoration workshops.

In recent years, more and more women have been restoring Qurans.

One female restorer, Khadija Mahmoud, trains women at a workshop in Zawiya, 45 kilometers west of Tripoli. She said it is easier and faster to restore Qurans in a women's workshop.

She added that the restoration work has given many women a meaningful way to fill their free time. She has even held training sessions for blind women.

"A large segment of trainees and restorers are retirees," she said. "For them, there is nothing better than spending their spare time in the service of the Quran."

Dan Novak adapted this story for VOA Learning English based on reporting from Agence France-Presse (AFP).

restore — v. to return (something) to an earlier or original condition by repairing it, cleaning it

fast — v. to not eat for a period of time

unprecedented— adj. not done or experienced before

sentimental— adj. something that is important to someone because of its connection with a happy time of life, a special person and similar feeling

bind — v. to put a cover or binding on a book

concentrate — v. to give your whole attention to the thing you are doing

bored — adj. to be tired or uninterested in something often because it is always the same