Life Expectancy in US Drops Again

Update Required To play the media you will need to either update your browser to a recent version or update your Flash plugin.
By Dan Friedell
31 August 2022


Life expectancy in the United States has dropped for the second straight year, a government report said on Wednesday.

The Centers for Disease Control and Prevention estimated that the average American born in 2021 will live for about 76 years. The average was 78 years and 10 months in 2019. And it dropped to 77 years in 2020.

Health officials blamed COVID-19 for half of the decrease. They said the rest was connected to longstanding problems such as drug overdoses, suicide and heart and liver disease. 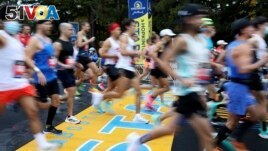 Samuel Preston studies human population, or demographics, for the University of Pennsylvania. He called the situation "dismal," or very bad. "It was bad before and it's gotten worse," he added.

Life expectancy is an estimate of the average number of years a baby born in a given year might expect to live, given death rates at that time.

For some racial groups in the U.S., the decreases were even worse than the average. For example, Native Americans' life expectancy dropped by over six years during the pandemic and is now at 65 years. For Asian Americans, the number dropped by two years to 83 years and 6 months.

The numbers released this week are based on early data. They could get even worse when all the deaths in 2021 are counted. In 2020, the numbers got worse by four months once all deaths were recorded. The last time American life expectancy dropped for two straight years was in the 1960s.

The report included some general numbers for the U.S. population:

The new report said suicide was one of the causes of the decrease in life expectancy in 2021, as the rate of suicide has gone up in the last year after dropping in 2019 and 2020.

overdose –n. an amount of drug that is too much and often dangerous

fundamental –adj. forming the most important part of something

indicator –n. a sign that shows the condition or existence of something