Update Required To play the media you will need to either update your browser to a recent version or update your Flash plugin.
By Pete Musto
20 February, 2019


Living in outer space for nearly a year had some interesting effects on American astronaut Scott Kelly.

Scientists found signs of increased activity in his immune system, the body's natural defenses against disease. Life in space also changed the activity of some of Kelly's genes compared to those of his identical twin brother, who stayed on Earth.

The scientists reported their findings at a conference earlier this month. But they admit they do not yet know if the changes are good or bad.

The findings are part of a larger, special study of twins from NASA, the United States government's space agency. The study raises new questions for doctors as agency officials make plans to send people to the planet Mars.

Tests of Kelly and his genetically identical brother have given scientists a chance like never before to study details of human biology. They are able to examine how an astronaut's genes turn on and off in space differently than on Earth.

One unexpected change announced at the recent meeting of the American Association for the Advancement of Science: Kelly's immune system was hyperactivated.

Geneticist Christopher Mason helped lead the study. Mason is with Weill Cornell Medicine, Cornell University's medical school in New York City. He told the Associated Press that doctors are now looking for this unusual condition in other astronauts.

"It's as if the body is reacting to this alien environment sort of like you would a mysterious organism being inside you," Mason said. 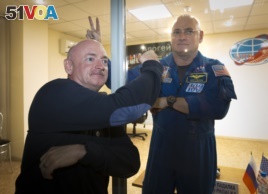 U.S. astronaut Scott Kelly, right, crew member of the mission to the International Space Station, ISS, poses through a safety glass with his brother, Mark Kelly, also an astronaut after a news conference in Russian leased Baikonur cosmodrome, Kazakhstan,

The health effects of space exploration

Since the beginning of space exploration, NASA has studied its effects on astronauts' bodies. One effect is bone loss, which results from being in a low-gravity environment over an extended period. As a result, astronauts are now required to perform physical exercise during long space flights.

Usually astronauts are in space about six months at a time. Kelly, who lived on the International Space Station, spent 340 days in space and set a U.S. record.

"I've never felt completely normal in space," Kelly wrote in an email to The Associated Press. He noted congestion and pain in his head, trouble paying attention, and stomach problems.

But this study was a look into the molecular level, with former astronaut Mark Kelly, Scott's twin brother, on the ground for comparison.

A number of genes connected to the immune system became hyperactive, Charles Mason said. It is not a change in DNA, the carrier of genetic information, but in what is called "gene expression." This term is used to describe how genes turn off and on and increase or decrease their production of proteins.

Mason also noted an increase in the bloodstream of another marker that prepares the immune system. Yet at the same time, Kelly's blood showed fewer of another kind of cell that is an early defense against viruses.

It is not a surprise that gene activity would change in space — it changes in reaction to all kinds of conditions.

The good news is most everything returned to normal shortly after Kelly returned to Earth in March 2016. However, those immune-related genes, "seemed to have this memory or this need to almost be on high alert" even six months later, Mason added.

Craig Kundrot heads space life and science research for NASA. He seemed pleased with the findings.

"There are no major new warning signs. We are seeing changes that we didn't necessarily anticipate" but it is unclear if those changes are important, Kundrot noted.

From four Russians living in space for more than a year, NASA already knew it is possible for people to spend large amounts of time away from Earth, Kundrot said. He added, "We also aim for more than just possible. We want our astronauts to do more than just survive."

In the end, the twin study gives NASA a list of things to watch for on future space missions to see if other astronauts react the same way. Astronauts on future flights will be able to do some of this testing in space instead of freezing blood and other material for scientists back home, Mason said.

A human mission to Mars, which NASA hopes to launch in the 2030s, would take 30 months, including time on the surface, said Kundrot.

Radiation is a top concern. The trip would expose astronauts to radiation levels higher than NASA's own safety limits. It's "just a little bit over," he said.

On Earth and even on the space station, Earth's magnetic field protects astronauts from high levels of radiation. There would be no such protections on the way to Mars and back, but special structures could help them on the planet, Kundrot said.

Lauran Neergaard and Seth Borenstein reported this story for the Associated Press. Pete Musto adapted it for VOA Learning English. George Grow was the editor.

How eager would you be to live in outer space, or on another planet, for a long period of time? We want to hear from you. Write to us in the Comments Section or on 51VOA.COM.

identical twin – n. either member of a pair of two babies that are produced from a single egg and who look exactly alike

hyperactivated – adj. made more active than is usual or desirable

alien – adj. not familiar or like other things you have known

congestion – n. a condition where a part of the body is blocked with fluid, such as blood or mucus

alert – n. the state of being ready for something you have been warned about, such as an attack

anticipate – v. to think of something that will or might happen in the future

expose – v. to cause someone to experience something or to be influenced or affected by something