Life on Titan? New NASA Mission Will Find Out

Update Required To play the media you will need to either update your browser to a recent version or update your Flash plugin.
By Anne Ball
06 July, 2019


Titan, a moon around the planet Saturn, has the right materials for life, NASA research has shown. The US space agency's newly announced Dragonfly mission will explore the icy space object to learn if it ever did hold life.

Titan is similar to a very early Earth, and NASA says it can provide clues to how life may have started on our planet.

In some ways, Titan looks like Earth. There are lakes and seas across the northern half, and sometimes rain hits the sandy surface. But this is where the similarities end.

Titan is so cold that water is rock-hard ice, and oily methane falls from the sky and into the seas. The beaches are different too. Titan's sand is made up of carbon, hydrogen, nitrogen and oxygen, unlike any beach on Earth. 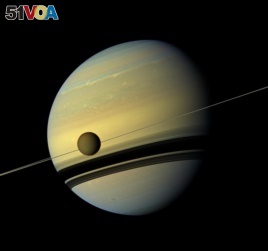 Titan, in front of Saturn, as seen by Cassini

"One of the things I think is so exciting about Titan is how it can be alien and familiar at the same time," said Elizabeth Turtle, Dragonfly's lead investigator. At -179 degrees Celsius, "it's totally different material than what we're used to interacting with on a daily basis." For example, there is water-ice bedrock—the material under the surface of the ground and large areas of liquid methane.

Titan's surface is hidden below its atmosphere which is four times as dense as Earth's. But its lower level gravity makes Titan a good place for a flying explorer.

Drones are small aircrafts that fly without a pilot. With the progress in drone technology, the Dragonfly team recognized that they could make what was once a dream—flying on Titan—a reality.

Dragonfly will be three meters long and more than a meter tall. It will fly with the help of two sets of four propellers. The design will permit Dragonfly to take pictures from above the moon, and to land on Titan's frozen surface for a closer look.

At first, it will target an area near the moon's equator, or middle. It is covered in huge sand hills, similar to what is found in Earth's deserts. From there Dragonfly will move out and explore the moon by taking large jumps to see what lies ahead.

When it lands, it will study samples of the surface, take photographs and look for "titanquakes"— like earthquakes.

Dragonfly will travel at eight kilometers per jump, and make its way to Selk crater, more than 100 kilometers away. The crater was formed when a large object hit the area. Scientists think that the heat from the hit would have turned the ice to water in Titan's crust. That could have created an environment that would have all the necessary elements for life.

The Dragonfly team hopes to learn whether combining organic material with liquid water and energy in the form of heat could have caused complex molecules to develop – or even life itself.

"We have this chance to explore a world that we know has all the ingredients for life, but how far did it get towards life?" said Melissa Trainer, the mission's deputy lead investigator.

If life is, or has been on Titan, Dragonfly should be able to find it. Its instruments will be searching for is a class of molecules called amino acids, which are found in all life on Earth.

Dragonfly is expected to launch in 2026 and arrive at Titan in 2034. The science and engineering teams are designing and building the spacecraft.

The trip may be a long way off, but the team believes the mission will be worth the wait.

Let us know what you think of this story. Write to us in the comments section below.

alien – n. from somewhere other than the planet Earth

propeller – n. a device with two or more blades that turn quickly and cause a ship or aircraft to move

crust – n. a hard layer on the surface of something