Update Required To play the media you will need to either update your browser to a recent version or update your Flash plugin.
By VOA
22 January, 2013

From VOA Learning English, this is the Health Report in Special English. A new study adds to evidence suggesting that being bilingual is good for the brain. In the study, older adults who have spoken two languages since childhood showed better mental skills than those who speak just one language.

Earlier studies showed that bilingualism seemed to favor the development of these heightened skills. The authors of the new study say their findings provide evidence of that cognitive advantage among older, bilingual adults.

Brian Gold was the lead author of the study. Dr. Gold is a neuroscientist at the University of Kentucky College of Medicine. 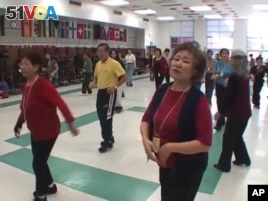 Virtual Center Keeps Seniors on Their Toes
In the study, the researchers asked people to sort colors and shapes in a series of simple exercises. Dr. Gold and his colleagues used brain imaging to compare how well three groups of people switched among these exercises. The groups were bilingual seniors, monolingual seniors and younger adults.

The imaging showed different patterns of activity in the frontal part of the brain, in an area used for processing such tasks.

"We found that seniors who are bilingual are able to activate their brain with a magnitude closer to young subjects. So they don't need to expend as much effort, and yet they still out-perform their monolingual peers, suggesting they use their brain more efficiently."

Dr. Gold says knowing a second language made no difference for the young adults. They did better at the exercises than both groups of older people. But he says the older bilingual adults appear to have built up a kind of surplus from a lifetime of increased mental activity.

He says his research confirms a previous study on bilingualism among patients with Alzheimer's, a brain-wasting disease. That study showed that bilingual speakers developed more damage, but were able to think at the same level as patients with less damage.

"This study showed that the bilinguals tended to have more brain atrophy, suggesting, you know, the fact that they're at the same cognitive level, somehow their bilingualism is helping them to compensate for that more brain atrophy. This finding that we have is consistent with that, because it basically says that bilinguals as seniors are able to do more with less."

Dr. Gold says he believes the new study confirms that bilingualism can play a protective role in the brain. He now plans to study whether learning a second language or immigrating to another country as an adult can provide some of the same mental advantages as lifelong bilingualism.

The study appears in the Journal of Neuroscience.
Related Articles
go top