'Lightning Never Strikes the Same Place Twice'... Or Does It?

Update Required To play the media you will need to either update your browser to a recent version or update your Flash plugin.
By Anna Matteo
11 July 2020

Lightning is one of the most powerful forces in nature. Scientists describe lightning as a huge burst of electricity between clouds, the air, or the ground.

These bolts of electricity can heat the air around them to temperatures five times higher than the surface of the sun. And that is really hot! 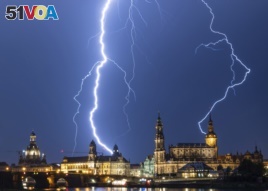 When you watch lighting, you know it's fast. That is why English speakers use the expression lightning speed to describe anything that is super-fast.

So, lightning is fast; it also can be dangerous. When a thunder and lightning storm starts, it is best to find shelter. Do not stand in an open field.

Now, to protect buildings from lightning damage during a storm, you can attach a lightning rod to it. A lightning rod is a long piece of metal. This metal draws lightning away from the building.

People can also act as lightning rods ... but in a different way.

They attract attention, criticism and even anger of other people. A lightning rod is someone who becomes the target of criticism to draw attention away from more serious issues or other people.

Issues and even objects can become lightning rods, too. Anything that comes to represent something that people criticize can be called a lightning rod.

When speaking about lightning, we have another common expression:

We use this expression when a very unusual event is not likely to happen again to the same person or in the same place.

It can be used when something good happens, such as winning a game of chance like the lottery. That does not happen very often.

Here is another example. Let's say your favorite sports team is having a bad year. But they were still able to defeat a much stronger team. However, the next time they face that stronger team, your team might not be so lucky. You know what they say -- lightning never strikes twice.

We also use this expression to say a bad thing won't happen again. We use this reassure someone, trying to make them feel better.

For example, let's say you are watching a baseball game and get hit by a baseball in your seat. Your friend might say, "Well, you're safe now. That cannot happen again! You know, lightning never strikes twice!"

That probably will not make your head feel any better. And you can tell your friend that scientists say that lightning can and will strike the same place twice.

Whether for something good or bad, the underlying truth remains the same: The chances of some unlikely thing happening twice is very small.

And that's Words and Their Stories for this week. Until next time ... I'm Anna Matteo!

The song at the end is Stephanie Beaumont singing "Whoever Said That."

draw – v. to cause (attention) to be given to someone or something

underlying – adj. used to identify the idea, cause, problem, etc., that forms the basis of something

miracle – n. something (as an event or accomplishment) that is very outstanding, unusual, or wonderful