Update Required To play the media you will need to either update your browser to a recent version or update your Flash plugin.
By Ashley Thompson
13 April, 2018

A huge international study has found that adults should not drink more than, on average, one alcoholic drink a day.

That means drinking advisements in many countries around the world may be far too loose.

The study was published this week in The Lancet. 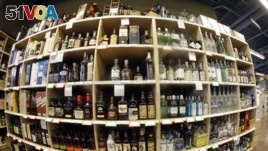 This June 16, 2016, file photo, taken with a fisheye lens, shows bottles of alcohol during a tour of a state liquor store, in Salt Lake City. (AP Photo/Rick Bowmer, File)

Dr. Angela Wood of Cambridge University led the research. The work combined results from 83 studies carried out in 19 countries. It considered about 600,000 people who drank alcohol.

The study found that people who drink more than seven drinks a week can expect to die sooner than those who drink less.

The United States government currently advises no more than seven drinks a week for women and 14 for men. Those limits are based on earlier studies that found women are more affected by alcohol than men.

Canada and Sweden have similar guidelines.

British guidelines were also similar until two years ago. That is when British health officials brought the upper limit for men down to the same limit as women.

Some countries have much higher limits, however. Spain and Romania both suggest drinking as many as 20 alcoholic drinks per week for men is acceptable.

The new study estimates that 40-year-old men who drink as much as current U.S. guidelines suggest can expect to live one to two years less than men who have no more than seven drinks per week.

David Jernigan, an alcohol researcher at Johns Hopkins University, told the Associated Press, "if you're really concerned about your longevity, don't have more than one drink a day." Jernigan was not involved in the study.

The study "is a serious wake-up call for many countries," Jeremy Pearson of the British Heart Foundation said in a statement. The group supported the study financially.

About half of the people included in the study said they had more than 100 grams of alcohol per week. The researchers found a higher risk of stroke, heart failure and other problems in that group of heavier drinkers. That may partly be because alcohol can increase blood pressure and change cholesterol levels, the researchers said.

The heavier drinkers were also less likely to have a heart attack, the study found. However, the overall effects of drinking more than seven drinks a week are more bad than good, lead researcher Wood said.

The results of the study quickly became a trending discussion worldwide. As one person wrote, the news was "not a good story to read on a Friday," as workers and students prepare to celebrate the start of the weekend.

longevity - n. long life: the fact of living for many years

wake-up call - n. something that makes you fully understand a problem, danger, or need

cholesterol - n. a substance that is found in the bodies of people and animals

per - prep. for each