Update Required To play the media you will need to either update your browser to a recent version or update your Flash plugin.
By Frank Beardsley & Kelly Jean Kelly
19 November, 2014

In July 1863, Northern and Southern soldiers fought at the town of Gettysburg in Pennsylvania. It was the bloodiest battle of the American Civil War. About 23,000 Union soldiers and 28,000 Confederate soldiers died in the fighting. Most of the bodies were buried where they fell.

Five months later, President Abraham Lincoln traveled to Gettysburg to speak at a ceremony establishing a military burial ground there.

Another, more famous speaker had also been invited. But the president felt it was important for him to go. He wanted to honor the brave men who died at Gettysburg. Lincoln hoped his words might ease the sorrow over the loss of these men and lift the spirit of the nation. 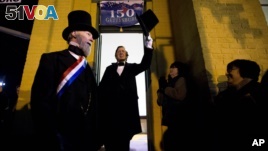 An actor portraying President Abraham Lincoln arrives at the train station in Gettysburg, Pennsylvania in 2013.

On the morning of November 19, 1863, Lincoln led a slow parade on horseback to the new cemetery. A huge crowd waited.?Military bands played. Soldiers saluted.

The ceremonies began with a prayer. Then a former senator and governor from Massachusetts rose to speak. Edward Everett was a well-known speaker. He had been invited to give the dedication address.

Everett spoke for almost two hours. He closed his speech with the hope that the nation would come out of the war with greater unity than ever before.

Then Lincoln stood up. He looked out over the valley, then down at the papers in his hand. He began to read.

"Four score and seven years ago our fathers brought forth on this continent, a new nation, conceived in Liberty, and dedicated to the proposition that all men are created equal.

"Now we are engaged in a great civil war, testing whether that nation, or any nation so conceived and so dedicated, can long endure.?We are met on a great battle-field of that war. We have come to dedicate a portion of that field, as a final resting place for those who here gave their lives, that that nation might live. It is altogether fitting and proper that we should do this.

"But, in a larger sense, we cannot dedicate -- we cannot consecrate --?we cannot hallow, this ground. The brave men, living and dead, who struggled here, have consecrated it far above our poor power to add or detract. The world will little note, nor long remember what we say here, but it can never forget what they did here. It is for us the living, rather, to be dedicated here to the unfinished work for which they who fought here have thus far so nobly advanced. It is rather for us to be here dedicated to the great task remaining before us -- that from these honored dead we take increased devotion to that cause for which they gave the last full measure of devotion -- that we here highly resolve that these dead shall not have died in vain -- that this nation, under God, shall have a new birth of freedom -- and that government of the people, by the people, for the people, shall not perish from the earth."

President Lincoln's address was fewer than 300 words long. When he finished, the crowd applauded. Then the people began to leave.

Today, Lincoln's Gettysburg Address remains one of the most memorable speeches in American history.

And I'm Christopher Cruise. This is The Making of a Nation from VOA Learning English.

[Editor's note: Lincoln wrote at least five copies of the Gettysburg Address, with small differences among them. The above text is known as the Bliss copy. It is the same text that appears on the Lincoln Memorial in Washington, DC.]

dedicated – adj. having strong support or loyalty; v. used time, money or energy for a purpose

dedicate v. officially make a place for remembering someone or something;

proposition – n. a statement to be proved, explained or discussed

consecrate – v. to make something holy

devotion – n. a feeling of strong love or loyalty

in vain – adj. without producing a good result

This story uses many forms of the word dedicate. In the comment section, see if you can write three sentences that each use the word differently.