Update Required To play the media you will need to either update your browser to a recent version or update your Flash plugin.
By Hal Berman and Frank Beardsley
24 December, 2014

On April 9, 1865, Confederate General Robert E. Lee surrendered his army to Union General Ulysses Grant. Within weeks, the Civil War would be over. 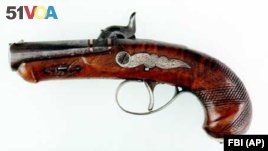 This is the Deringer pistol that was recovered from the state box at the Ford Theater and used by John Wilkes Booth to assassinate President Abraham Lincoln in 1865.

But President Abraham Lincoln was already thinking about the difficult times ahead. Lincoln did not want to punish the South. He wanted to repair the ties the Civil War had broken. Lincoln hoped to make people forget hatred and bitterness so the country could re-build.

In the afternoon, he took his wife Mary for a long drive away from the city of Washington. That night, they went to the theater.

When Lincoln was assassinated by John Wilkes Booth, he was attending a performance of "Our American Cousin" at Ford's Theatre in Washington.

One of the popular plays of the time, called "Our American Cousin," was being performed at Ford's Theater, not far from the White House.

The President and Mrs. Lincoln sat in special seats. The presidential box was above and to one side of the stage. A guard always stood outside the door to the box. On this night, however, the guard did not remain. He left the box unprotected.

President Lincoln settled down in his seat to enjoy the play. As he did so, a man came to the door of the box. He carried a gun in one hand and a knife in the other. The man entered the presidential box quietly. He slowly raised the gun. He aimed it at the back of Lincoln's head. He fired.

Then the man jumped from the box to the stage three meters below. He broke his leg when he hit the stage floor. But he pulled himself up, shouted, "Sic semper tyrannis!" -- "Thus ever to tyrants!" -- and ran out the door. Then he got on a horse and was gone.

The attack was so quick the audience did not know what happened. Then a woman shouted, "The president has been shot!"

Lincoln had fallen forward in his seat, unconscious. Someone asked if it was possible to move him to the White House. A young army doctor said no. The president's wound was terrible.

So Lincoln was moved to a house across the street from Ford's Theater. A doctor tried to remove the bullet from Lincoln's head. He could not. Nothing could be done, except wait.

Early the next morning, on April 15, Abraham Lincoln died. A prayer was said over his body. His eyes were closed.

The news spread to cities and towns across the country. People hung black cloth on their doors in sorrow.

Even the South mourned for Lincoln, its former enemy. Southern General Joe Johnston said, "His death is the worst thing that could happen for the South."

The gunman who shot Lincoln was an actor: John Wilkes Booth. Booth fled the theater after the murder. Almost two weeks later, soldiers found him hiding and killed him. 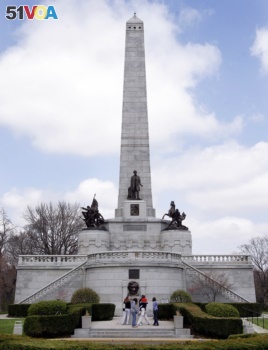 In a notebook, Booth described why he had shot the president. "Our country," Booth wrote, "owed all her troubles to him. And God simply made me the instrument of his punishment."

Hal Berman and Frank Beardsley wrote this story. George Grow was the editor.

tyrant – n. a ruler who has complete power over a country and who is cruel and unfair

unconscious – adj. not awake, especially because of an injury

instrument – n. a tool or device used for a purpose

Now it's your turn. Based on what you learned in The Making of a Nation series, argue against Booth's statement, "Our country owed all its troubles to him."